KBO loses overseas players to lure of the yen

KBO loses overseas players to lure of the yen 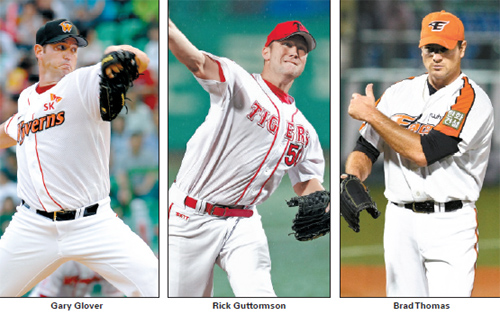 Korean Baseball Organization teams must deal with it at the end of the season every year: competing with Nippon Professional Baseball teams for the services of overseas players.

NPB teams send scouts to KBO games on a regular basis to evaluate domestic players nearing the end of their contracts. However, many more NPB scouts focus on evaluating overseas players in the KBO. Each KBO team carries two overseas players.

Three pitchers appear to have caught the eye of NPB scouts this season. Brad Thomas of the Hanwha Eagles, Gary Glover of the SK Wyverns and Rick Guttormson of the Kia Tigers are on the list of targeted players.

While Japan has always been considered a step ahead of Korean baseball in the past, in recent years, Korea has fared better than Japan in international tournaments, giving a reason for other league officials to reevaluate Korean professional baseball. NPB teams are taking more interest in domestic free agents, especially when it comes to overseas players in the KBO.

“Players like Tyrone Woods and Seth Greisinger have proven that those who have done well in the KBO can fare well in the NPB,” said an overseas players scout for a Seoul based team. “Korea has done well in international tourneys over the past few years and it has heightened the interest in the KBO teams. This has in turn heightened interest in overseas players in the KBO. This rings especially true for pitchers who have notched 10 wins or more in the KBO this season.”

“They are fully aware of Korean baseball. They know Hanwha’s poor record [last in league standings] was a big reason for the drop in his numbers this year,” said the scout.

The consensus on Glover and Guttormson is that they are headed to the NPB. “Many NPB teams were linked to signing the two players in the Japanese media. Several teams had sent scouts to evaluate the two during the season,” said one scout.

As one scout tells it, when given the choice, most players will make the jump to NPB.

“To be honest, when a Japanese and Korean club gets into a competition for a player, Korean teams have a slim chance of winning the bid,” said a scout for one regional team. “While the amount and length of the contracts similar, NPB teams offer much bigger bonuses and incentives.”