Next stop for Pohang, the Club World Cup

Next stop for Pohang, the Club World Cup 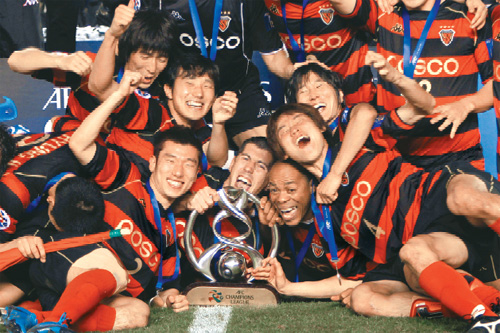 Playing out of their element, Pohang Steelers pulled off an exciting 2-1 win over Al-Ittihad at the National Stadium in Tokyo, Japan over the weekend, a victory that propels them into the FIFA Club World Cup later this year.

“We still have the K-League playoffs but we have a lot of interest in the FIFA Club World Cup which will determine the best team in the world,” said Pohang manager Sergio Farias in a post-game interview. “We still have some areas to improve on but we will try our best.”

The FIFA Club World Cup will pit seven of the world’s best clubs in a tourney in Abu Dhabi, U.A.E.

The Club World Cup is set to take place between Dec. 9 and 19 and will feature the six continental champions and the winner of the UFL, the U.A.E. Football League.

Pohang won back-to-back Asian Club Championship titles in 1997 and 1998 but this is the first time Pohang has claimed the AFC Champions League title.

Leading up to the match, Farias and the attack-minded Pohang Steelers had promised another high-tempo affair in the final but had trouble playing up to their reputation against Al-Ittihad’s defense.

However, Pohang was able to edge out the equally potent Saudi squad who had been undefeated in the Champions League this year.

Noh Byung-joon scored the opening goal in the 57th minute off a free kick. Central defender Kim Hyung-il followed with a header off Kim Jae-sung’s free-kick in the 65th minute to put the Steelers up 2-0.

Al-Ittihad responded with a Mohammed Noor volley that found the back of the net in the 74th minute.

“A successful team has the ability to find a way to win even in the most difficult and dire situations. If Pohang showed that ability today, Al-Ittihad did not,” said Farias after the game.

“Korean football is based on speed and physical play. This is the biggest reason why Al-Ittihad could not play up to their usual capabilities. I think Al-Ittihad did not figure out a way to counter Korean football,” added Farias.

“Al-Ittihad played a solid defensive game and did not make it easy on us. But we found a way to get to them through set plays. In contrast, Al-Ittihad had difficulties connecting on their set plays. I think the outcome of the game was determined in the set plays,” he said.

Since taking over the managerial position for the Steelers in 2005, Farias won the K-League title in 2007, FA Cup in 2008 and the Peace Cup in September.

Local media has come to call the impressive turnaround in Pohang under the Brazilian manager “Farias magic.”

Farias complimented his team and the manner in which it improvised its play to earn a big win in Tokyo over the weekend.

Noh was awarded with the Most Valuable Player award. In scoring four goals at the Champions League, the 30-year-old forward had been an integral part of Pohang’s high-scoring offense.

“I had been suffering from a bad cold up until four days ago and had trouble breathing. But I tried my best and it led to a good result,” said Noh. “I was a little surprised because I though Kim Jae-sung would win the award.”

Noh was picked up by Farias in 2007 after a failed attempt to play in the Austrian football league in 2006. Along with Denilson and Stevica Ristic, Noh made up the core of Pohang’s high-scoring offense this season. His contract expires in December but Noh has not decided on his fate yet.

“I was offered a contract extension from Pohang. I plan on making a decision after the K-League playoffs and FIFA Club World Cup,” stated Noh.