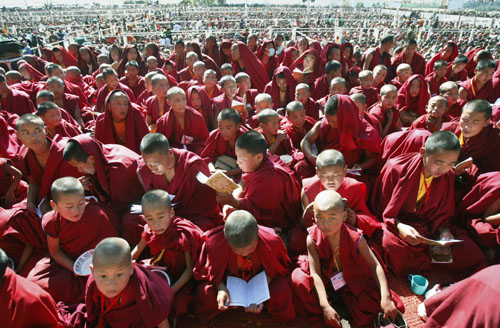 Buddhist monks listen to the teachings of their spiritual leader, the Dalai Lama, in Tawang, in the northeastern Indian state of Arunachal Pradesh, yesterday. Thousands of Buddhist monks and supporters welcomed Tibet’s exiled spiritual leader on Sunday to the remote Indian region also claimed by China, a trip that has renewed tensions between the Asian giants. The visit, as well as reports of border incursions in recent months, has triggered tensions between the world’s two most populous nations, whose relations remain hostage to mutual suspicion lingering from a brief 1962 border war. [REUTERS]