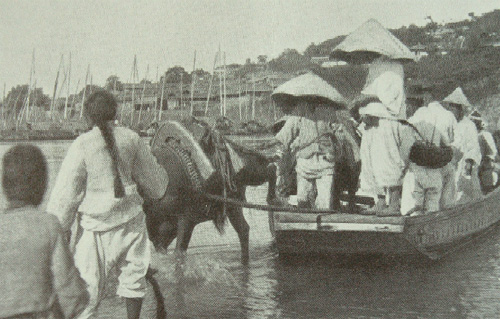 One of the major functions of the Han River in ancient times was transportation, particularly for grain and other key goods. [JoongAng Ilbo]

Some call it Korea’s lifeline, others call it the country’s primary vein or even its belt.

However you want to describe it, the Han River that snakes from east to west across the country has served as a key backdrop in the daily lives of Koreans for a long time. The river itself, in fact, dates all the way back to the Paleolithic Age.

It’s not uncommon for civilizations to emerge along the banks of large rivers. Look no further than the Tigris and the Euphrates in Mesopotamia, the Nile in Egypt, the Indus in India and the Yellow River in China. The Han is Korea’s equivalent to those rivers.

The phrase “Miracle on the Han” rings a bell with many Koreans - and some foreigners, too. Taking after the “Miracle on the Rhine,” it refers to Korea’s rise from the struggling underdog of Asia to one of the major economies in the region in just a couple of decades. 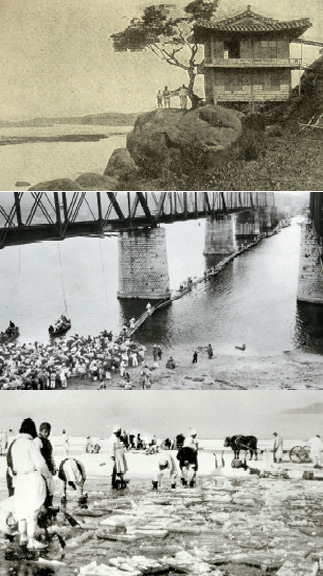 Top: The scenic river was an inspiration for the literati, who built pavilions on the banks to appreciate its beauty. Provided by the Myongji University-LG Yeonam Library Middle: Korean refugees fleeing on a makeshift wood walkway during the 1950-1953 Korean War. Above: Koreans used to extract ice cubes from the river in the winter. [JoongAng Ilbo]

Several major construction projects occurred around the Han River during this period of immense growth, which ran from the 1960s to the 1990s, as the city cleaned up the area by covering the muddy ground with concrete and building numerous public parks.

But the reason that Koreans adopted such a lofty tagline for the river is because of its undeniably symbolic role throughout the country’s history.

Scholars here trace the Han River’s history all the way back to the time when Homo erectus and, later, Homo sapiens roamed the earth.

According to “Han River: Past and Present,” published by City History Compilation Committee of Seoul in 2001, relics from the era were discovered in areas like Myeonmok-dong, Amsa-dong and Garak-dong.

Other notable findings along the valleys of the Han River include comb-pattern pottery from the Neolithic Age, non-pattern pottery, dugout hut sites and tombs from the Bronze Age. Of the areas where these were found, the Ganghwa Dolmen sites in Incheon were added to the list of Unesco World Heritage sites in 2000.

These relics make it clear that the river played a powerful role in history, as it represented the key to the country.

“Whoever secured the Han River conquered the Korean Peninsula,” Lee Byeong-do (1896-1989), a noted historian in Korea, once was quoted as saying.

This appears particularly true in the Three Kingdoms period (57 B.C.-A.D.668) when the Goguryeo, Baekje and Silla kingdoms tirelessly fought for a bigger slice of the peninsula. Eventually Silla secured major parts of the Han River, formed an alliance with China’s Tang Dynasty (A.D. 618-907) and unified the kingdoms in 676.

A big break in the Han River’s history came with the dawn of the Joseon Dynasty (1392-1910), when Seoul was declared the capital.

Historians with the City History Compilation Committee of Seoul say the river had four main functions during the Joseon period: transportation, in that people used the waterway to get around the country; commerce, as important materials like grain, salt and wood were shipped via the river; defense, in that it protected the capital from enemies; and culture, as people flocked to the Han for waterside excursions, ferry rides and other events.

Additionally, locals extracted ice cubes from the Han River from the Joseon period all the way up until the mid-20th century.

Women also did their laundry there, and children swam in the river in the summer.

Near the close of the 19th century and the beginning of the next one, there were several key “firsts” along the Han River. Historic records show that the first foreign ships appeared on the river in 1886, when the French sent forces here to retaliate after the execution of nine French Catholics in Korea. Then, in 1900 the first bridge was built over the river when a Japanese firm constructing the country’s first railroad, the Gyeongin Line, built the Hangang Railway Bridge.

In 1925, a disastrous flood occurred, killing hundreds of people and inundating tens of thousands of homes. This prompted the Japanese, who colonized Korea from 1910 to 1945, to enact various safety and prevention measures and projects, such as setting up banks and drainage systems.

Nonetheless, like Korea as a whole, the Han River survived invasions, war and modernization.

Left: The Korean government has been reinstalling lights on the bridges over the river as part of its “Han River Renaissance Project,” which began in 2007. Right: The Han River has long been a venue for recreational activities and water sports. [JoongAng Ilbo]

Today, it’s a popular place for families and those who enjoy water sports.

It also serves as a solid representation of Seoul. On a recent afternoon, for instance, a group of foreign students studying in Korea gathered at Seonyu Island on the Han River in western Seoul. The 40 students from eight countries including China, Mongolia and Bangladesh were participating in a program dubbed “Experience Han River Culture and Historic Sites,” organized by the civic group Korea Globe and sponsored by the Seoul Metropolitan Government to help foreign students better understand the country’s culture and history.

As part of the program, the students also visited a riverside park in Banpo, southern Seoul, toured the Waterworks Museum in Seongdong, central Seoul and took a ferry cruise.

“The Han River has the perfect profile [for our program],” said Kim Hyeon-in of Korea Globe. “Through it we can demonstrate Koreans’ daily lives as well as the country’s history.”

The Han River is the second part of the organization’s program. The first part took students to traditional houses, and the third to city squares.

The river certainly appears to be the go-to place to learn about Korea. While Korea Globe’s program is a newcomer to the scene, Korean cities and provinces have been collaborating to present annual educational tours of the Han River for Korean youths every summer since 1999.

In a recent interview with Korean media, Simon Anholt, a policy adviser keen on national brands, said that he hopes that the river’s banks will be developed into a city landmark, as the Han has been the heart of Seoul for more than 500 years. And let’s face it: Despite it’s popularity and role in Korean history, the river really isn’t a landmark at this point. But that could change, as the river is undergoing another major surgery.

The Seoul Metropolitan Government in 2007 announced what it is calling the “Han River Renaissance.” The ambitious project, set to be completed in 2030, includes a whole host of improvements, from building waterfront towns, more green zones and eco-friendly parks to constructing an international ferry terminal and launching a sea lane between Yeouido and China.

Emphasizing that the keywords in the project are “recovery” and “creation,” Seoul Mayor Oh Se-hoon said that the Han River Renaissance will make the river “more suitable for Seoulites’ daily lives, while at the same time make the river a landmark that will attract foreign tourists.”

It looks like, if anything, things will get pretty busy around the river in the near future.

The Lee Myung-bak administration is working on a massive project to restore the country’s four major rivers - the Nakdong, Han, Geum and Yeongsan - in order to secure high-quality water, prevent natural disasters and boost the nation’s economy, among other things.

In coming years, Koreans will see what kind of new life these projects will breathe into the river.

Regardless, the Han will continue to be the river that gave birth to their civilization and culture.