The debate over hanok heating up

The debate over hanok heating up 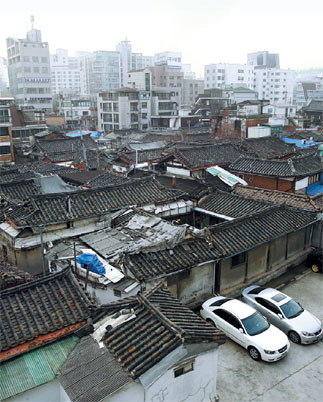 A shot of aging traditional Korean homes in Chebu-dong, Jongno District. The residents of the neighborhood have voted in favor or a redevelopment plan that will bring more modern buildings to the area. Ikseon-dong and other neighborhoods might face similar fates. By Ahn Seong-sik

Stroll through the tangle of alleyways in the Ikseon-dong neighborhood of the Jongno District and you’re transported to another world, one where quaint wood-frame homes with ornate roofs line the streets alongside boutiques selling colorful clothing from a bygone era.

Ikseon-dong is one of only a handful of neighborhoods in Seoul where traditional homes, called hanok, still dominate the landscape, harkening back to Korea’s not-so-distant past. The country’s rapid march toward industrialization in the second half of the 20th century often trampled cultural preservation efforts.

With Korea now firmly entrenched in the developed world, however, some city officials are trying to shelter areas like Ikseon-dong from the continuing push toward modernization, setting aside large chunks of money to help hanok owners renovate and upgrade their homes.

It’s a noble goal, as the homes represent a unique cultural asset for the city and provide a window into its history. But these efforts are being met with resistance from a surprising segment of the population: the homeowners themselves.

Some owners say they’d rather have the government tear down their homes and build modern apartments on the land, provided they get space in the new residences. Hanok, they claim, are relatively uncomfortable in this day and age, as they have poor heating in winter, antiquated bathroom facilities and other drawbacks. These families, many of which have lived in the homes for decades, would rather reside in a modern apartment than a historical house.

“They are part of the Jongno District’s past and tradition, and I understand why people want to keep them, but modern buildings are long overdue in this area,” 64-year-old Kim Young-il, who has lived in a hanok in Ikseon-dong for close to 50 years, said on a recent night while having drinks with his friends. “People who don’t live in hanok do not realize how inconvenient they are. If you had a choice of choosing between a warm and modern apartment unit over an outdated hanok house, what would you do?”

Neighborhoods like Ikseon-dong - which sits in an area behind Unhyun Palace - were quite common around Seoul until the 1970s, when modern apartment and office buildings began to replace hanok. Today, there’s only a handful of these hanok-filled areas left in this bustling city of 12 million people. And Ikseon-dong might disappear from that list altogether in coming years. The neighborhood is one of numerous areas the government is targeting for redevelopment under a plan to make the city a more cosmopolitan, aesthetically pleasing place for visitors and residents alike. One proposed plan calls for demolishing some hanok and constructing new homes and office buildings where they used to stand.

It’s a touchy subject, as the city must balance the need to modernize with the desire to preserve tradition, and there are vocal supporters and opponents to such plans.

The move to preserve hanok began in earnest last year when Seoul City Mayor Oh Se-hoon declared during a press conference on Dec. 10 at the Bukchon Cultural Center in central Seoul that the city would do its best to preserve and expand hanok neighborhoods. Oh stated at the time that these homes are valuable cultural assets, expressing his desire to protect not only individual houses that have been deemed culturally significant but also entire neighborhoods as well. Oh also declared at the press conference that he would back a 370 billion won ($300 million) project to run until the end of 2018 to protect and preserve 4,500 hanok homes in Seoul. As part of these efforts, the government supports hanok owners by providing up to 90 million won for certain renovations, primarily exterior ones such as roofing upgrades.

Just last week, the city announced that it will designate 20 areas in central Seoul for preservation efforts - which could in theory affect the proposed redevelopment of Ikseon-dong if the neighborhood receives the designation.

These homes and neighborhoods are disappearing at a rapid clip. According to data from the Seoul Development Institute, there were approximately 20,000 hanok in the city in 2005. Today that number stands at 14,000, a whopping 30 percent decrease in less than five years. Officials in favor of preserving these homes hope to halt that slide - and even help reverse the numbers by building new houses in the traditional style.

“We have designated the western side of Gyeongbok Palace, the Donhwamun Gate area, Insa-dong and Bukchon for preservation efforts,” explained an official from the housing bureau in the Seoul City cultural properties division. “We are looking into adding more neighborhoods to the list including the central core area within the four ancient walls from the Joseon period [1392 to 1897] and also areas outside it. We are also looking into building new hanok around the city.”

That’s all well and good, but one of the key challenges to these preservation efforts is the fact that a fair share of people don’t actually want to live in these homes, despite their beauty and historical value.

Many hanok owners say their homes are too inconvenient and outdated, adding that they don’t have enough money to fully upgrade their houses to make them comparable with modern residences. Rather than receive some money for renovations, some families in Ikseon-dong, for example, want the city to move forward with the proposed plans to modernize a section of the neighborhood that measures roughly 10,000 pyeong, or approximately 30,000 square meters (7.4 acres), with new buildings and homes.

It’s an interesting dynamic, as some politicians and citizens who live in other areas have been vocal about their disapproval of the proposed redevelopment plan, saying it will erase a part of the area’s history.

But residents like Kwon Ru-gi, who owns a convenience store in a converted hanok, point out that those people don’t actually have to live and work in the homes.

“I’ve been operating this store here for about 25 years now and the hanok itself has been here for about a century from what I hear,” Kwon said recently while taking deep drags off a Virginia Slims cigarette. “Redevelopment is definitely needed. Take a look at this place and the houses in this neighborhood. It’s real old and brittle. People do not fix or renovate their houses. They would rather have a three- to four-story building built in its place. While outsiders talk about preserving culture and tradition, I can tell you most of the people in the area, including myself, have no interest in such business.”

A little bit up the alleyway, Kim Yong-il and several other men in their mid-60s braved the chilly evening weather over bowls of makgeolli, or traditional rice wine, outside a shop. When questioned about preserving hanok in the area, the men quickly shifted the topic of their post-dinner conversation. All agreed that change is needed.

Kim’s friends said the chance to get a cleaner and updated home with modern bathrooms and other facilities are good enough reasons to back the redevelopment plan.

Still, city official who support hanok preservation believe that more people would want to live in these homes if they had more money to upgrade them. Leading the charge are Seoul Metropolitan Council member Nam Jea-kyong and 34 other councilors pushing for a municipal law that would increase the support the government can provide hanok owners. Nam and his fellow council members announced last month that they are looking to increase the maximum amount available for hanok renovations from 90 million won to 130 million won per home. The group also is suggesting that the city dole out up to 240 million won for those looking to build new hanok houses. The initiative is currently under review, and Seoul will make a final ruling on the proposal by mid-December.

“It’s necessary. Money should not be an issue for the city,” Nam said. “The poor condition of these houses is a big problem for the residents of many of these hanok neighborhoods, including Ikseon-dong. These hanok are inconvenient and we have to support these people or they’re not going to want to continue to live in hanok.

“Visit these neighborhoods and you’ll find that the area is full of senior citizens who have spent their entire lives in the area. There aren’t any young people moving into the area. Seoul needs to move quickly by providing more benefits and incentives for these homeowners to preserve a part of our city’s history.”

Nam, however, said that city officials are not exactly gung ho about the idea of increasing the support fee for hanok homeowners.

“They realize cash support is necessary but are not comfortable about increasing the fee so soon after starting the support program last year,” Nam said.

Other areas are grappling with this issue, with mixed results.

According to Nam, residents of Chebu-dong in Jongno District have all agreed in favor of a mix of redevelopment and reconstruction in the area. The plan includes modern buildings but will also involve the construction of new hanok or support to preserve ones already there.

One of the most quintessential examples of hanok preservation in the city is Bukchon Hanok Village in central Seoul. Once protected by the city’s hanok preservation laws, its residents began to complain and demanded the right to redevelop the area. The city relented in the 1990s, and as expected this led to a decrease of hanok in the area as residential and office buildings sprouted up. Local officials responded with a project to preserve traditional homes in the area starting in 2001, and today it has a solid mix of the old and the new.

As for Ikseon-dong, more might be at stake than in other neighborhoods.

The area is located near Jongmyo, a 14th-century Confucian shrine where memorial services for kings and queens of the Joseon era were held. Jongmyo has been on the Unesco World Heritage list since 1995. National Assembly member Kim Bu-kyeong of the Democratic Party pointed out during a recent national audit that the proposed redevelopment plans for Ikseon-dong could result in Jongmyo being dropped from the Unesco World Heritage list.

“Although these houses might be inconvenient in several ways, it is important for us to preserve them,” said Lee Hak-won, a researcher and associate professor in the department of traditional architecture at the Korean National University of Cultural Heritage. “We need to look at the bigger picture. A combination of old and new architectural structures is necessary. And many cities around the world have successfully been able to incorporate both.”