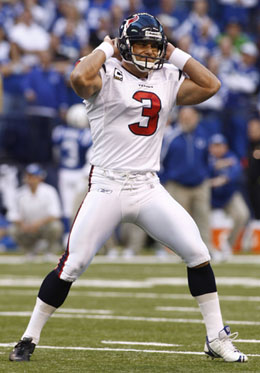 Houston Texans kicker Kris Brown reacts after missing a field goal as time expired against the Indianapolis Colts during their NFL game in Indianapolis on Sunday. [REUTERS]

INDIANAPOLIS - The Indianapolis Colts kept their unbeaten record with a 20-17 victory over the Houston Texans on Sunday when Kris Brown was wide to the left on a potentially game-tying 42-yard field goal attempt.

The victory was the 17th consecutive regular season triumph for the Colts, who have started the current season 8-0.

“It was a huge win,” Colts quarterback Peyton Manning told reporters after completing 34 of 50 passes for 318 yards and one touchdown, a seven-yard toss to Joseph Addai in the first quarter. “We had a great effort hanging in there,” Manning said. “Everything wasn’t perfect, but we did a great job fighting, and we came away with a big win.”

New Orleans, the NFL’s only other unbeaten team, also improved to 8-0 on Sunday when the Saints overcame a 14-0 deficit to defeat the Carolina Panthers 30-20.

Indianapolis tight end Dallas Clark sparked the Colts’ win, catching a career-high 14 passes for 114 yards. “No matter who is guarding him, we think he’s tough to cover,” Manning said.

Houston (5-4) held a 17-13 lead over their AFC South rivals early in the fourth quarter but Indianapolis rallied to go ahead 20-17 on Addai’s two-yard run with 7:11 to play. The Texans had one final chance and quarterback Matt Schaub led them from their 15 to the Colts 24 with a second to play.

But Brown, who had earlier made a 56-yard field goal, could not send the game into overtime. Indianapolis held a 13-0 second quarter lead before Schaub sparked Houston to 17 consecutive points. Along with Brown’s long field goal, the Texans scored on Schaub’s one-yard pass to Ryan Moats in the third and Steve Slaton’s one-yard run in the fourth. Schaub connected on 32 of 43 pass attempts for 311 yards but was intercepted twice.