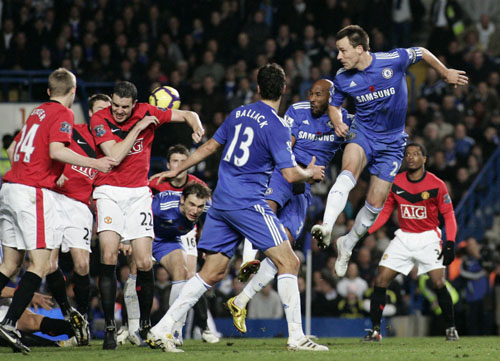 Chelsea’s John Terry, in blue at right, jumps to head the ball in to score against Manchester United during their English Premier League match at Stamford Bridge, London, on Sunday. [AP]

LONDON - Sir Alex Ferguson launched a furious attack on referee Martin Atkinson after his decision to award a controversial free-kick sent Manchester United crashing to a 1-0 defeat at title rivals Chelsea on Sunday.

Atkinson ruled that Darren Fletcher’s 76th minute challenge on Ashley Cole was worthy of a foul even though the Scot appeared to win the ball and, from the resulting Frank Lampard set-piece, John Terry headed in the winner. Ferguson’s side are now five points behind leaders Chelsea and the United manager, who also claimed Didier Drogba fouled Wes Brown at the free-kick, had no doubts that Atkinson was to blame for his team’s third defeat of the season.

“Clearly, Darren Fletcher’s won the ball, Ashley Cole’s never touched and has jumped up in the air, and then [Didier] Drogba’s pulled Brown to the ground for the goal,” Ferguson said. “The referee’s position to make the decision was absolutely ridiculous, he can’t see anything. He’s got a Chelsea player [Joe Cole] standing right in front of him and he doesn’t even move.

“That goal shouldn’t have been allowed. It was a bad decision, but there’s nothing we can do about it. You lose faith in refereeing sometimes, that’s the way the players are talking in there. It was a bad one.” 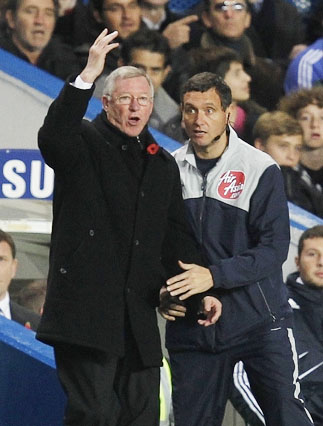 Ferguson insisted United had been the better team but he conceded they had only themselves to blame for failing to create clear-cut chances despite dominating possession.

“We dominated the game,” he said. “We were by far the better team.

“We had great opportunities to get to the edge of the box and some really good chances in and around the box, but we should be finishing it off.

“We’ve only ourselves to blame in that respect. But you do need a break - and we never got the break we needed.”

Ferguson admitted losing at Stamford Bridge was far more significant to the title race than their recent 2-0 defeat at arch rivals Liverpool.

While Ferguson fumed, Chelsea boss Carlo Ancelotti was able to celebrate the latest impressive result of his brief reign. The Italian has already masterminded wins over Liverpool and United since arriving from AC Milan in pre-season and he acknowledged it was a significant victory.

“We beat a very good team, we beat the best opponent [in the league] and we are five points clear, but we know very well that the season is long. We have to maintain this atmosphere and maintain this gap,” Ancelotti said.

Ancelotti felt Ferguson’s decision to pack midfield with five players had turned the match into a war of attrition for long periods.

“It was a strong match but Chelsea did what we had to do,” he said. “It was a difficult match for both teams, there was no space in midfield and it was difficult to create opportunities.”

There was some debate over the identity of Chelsea’s match-winner as John Terry’s header may have taken a slight deflection off Nicolas Anelka on its way in, but the England defender was keen to claim it.

“I got a touch on it. I think maybe Nico got the second touch but I’m still claiming it!” he said. “The five-point lead was exactly what we wanted coming into the game, we’ve been working on it all week. That wasn’t the best of games but I think overall we deserved it.”

Anelka added: “I don’t know what happened [on the goal]. I think I touched the ball but maybe John will claim it.” AFP