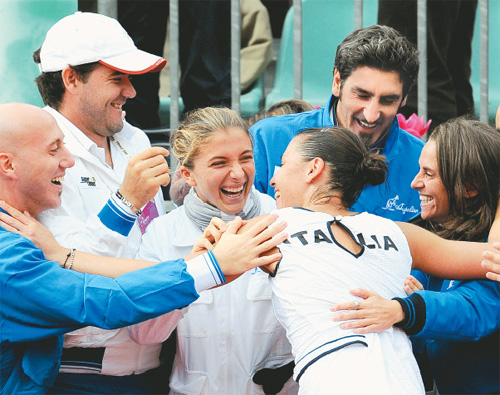 REGGIO CALABRIA, Italy - Italy stormed to a 2-0 lead over the United States in the Fed Cup final when Francesca Schiavone outfoxed Melanie Oudin 7-6, 6-2 on Saturday.

World No. 11 Flavia Pennetta had earlier overpowered Alexa Glatch 6-3, 6-1 to give the hosts a strong start.

Schiavone triumphed after having been 4-2 down in the first set, when rain forced a two-hour delay.

The Italian came back out much stronger and immediately broke the 18-year-old with an exquisite drop shot.

Her opponent then hit the net with an easy shot on serve in the tiebreak, allowing a confident Schiavone to take it 7-2.

Oudin, the top-ranked U.S. player in the team at 49 after Serena and Venus Williams decided not to compete, broke in the first game of the second set but lost the advantage straight away when she missed with a sliced backhand.

Schiavone then broke to love to move 3-1 up, and although she again carelessly dropped her serve, the win was hers.

“Even at 4-2 in the first set there wasn’t that big of a difference between us, it was very balanced,” Schiavone told a news conference.

“Afterwards she made a couple of mistakes and I quickly took advantage, and that’s through my experience.”

Oudin, who also had to deal with the partisan crowd, said the rain break played a part in her defeat.

“I think it definitely helped her. She came out and started playing a lot better. She wasn’t missing anything when she came back out. She changed her game a little bit,” the American said.

In the opening match, Pennetta quickly imposed herself and broke Glatch to go up 2-1 thanks in part to a superb drop shot.

She then sealed the first set when the tall American was broken again after going long.

Pennetta lost focus slightly at the start of the second set, being broken in the first game, but stormed straight back with a graceful winner to even it all up at 1-1 before easily wrapping up the match.

“It was very emotional with the national anthem [before play started]. I almost wanted to cry,” she said.

“I managed to play out the game well without being too spectacular and at the same time managing to stay calm.”

The Italians need to win just one more match to seal their second Fed Cup title, while the U.S. players are seeking an 18th crown.

“At the beginning I thought I had a couple of chances, but she played extremely well,” said the inexperienced Glatch, 20. “There were a few things which let me down.”

Rain is forecast in south Italy on Sunday when the reverse singles and doubles take place. Pennetta meets Oudin first. Organizers have the option of extending play until Monday if the tie is not completed.

The media are already criticizing their decision to play on an outdoor clay court in November.