Lessons from the Nixon era

Lessons from the Nixon era 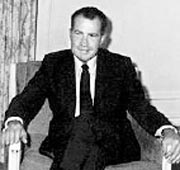 Richard Nixon, who was a member of the Republican Party, was elected as the president of the United States on Nov. 5, 1968. Although Nixon ran and was defeated by John F. Kennedy in the 1960 presidential election, he was determined to run again. He won the 1968 election by pledging to end the Vietnam War.

Nixon made history in a number of ways. In 1960, because of extremely close vote tallies and allegations of voter fraud against the Democrats, the election results were drawn out and subject to legal challenges. As such, precedent was set for the dramatics of George W. Bush’s defeat of Al Gore in 2000. He is also the only U.S. president to resign under the threat of impeachment.

Nixon was in office when the United States was in a crisis. The country was suffering from the effects of its excessive military spending throughout the 1960s. It also was having to give up the unique status of the U.S. dollar in the international economy due to the economic revival of Europe and Japan. Lastly, it was confronting the winds of the anti-war movement as the Vietnam War expanded into Cambodia, despite Nixon’s presidential pledge to end it.

However, the events attributed to him were not all disgraceful. He opened the era of detente between the East and the West through his historic visit to Beijing in 1972 and also through the signing of an agreement on nuclear arms reduction with the Soviet Union. He also ended one of the most disgraceful wars in the history of the United States by deciding to withdraw American troops from Vietnam. It should also be noted that he set a record of winning 49 states, except Massachusetts, in the 1972 presidential election.

Nixon’s presidency also had its share of ties with Korea, too. When he won a seat in the Senate in 1950, Raymond Cohen, an international relations scholar, said it would not have been possible for an opportunist like Nixon to enter politics in the United States if it had not been for the Korean War.

In 1969, the Nixon Doctrine made relations between Korea and the U.S. more complicated. The doctrine said that the United States’ Asian allies should ensure their own national security. It was a preliminary measure for Washington to withdraw its military presence in Vietnam. It was a declaration that affected the global military presence of the United States, including the decrease in the number of U.S. troops stationed in Korea. South Korea, which dispatched combat troops to Vietnam, had received assurance from the Johnson administration that Washington would consult with Seoul if there were to be any reductions of American forces in Korea. However, the Nixon administration announced in 1970, without consulting South Korea, that adjustments would be made to the number of U.S. military personnel stationed here.

Since there was no discussion on the issue when President Park Chung Hee met President Nixon in San Francisco in August 1969, the Korean government had even expressed the view that South Korea should be exempt from the doctrine. Ultimately, the discord between the two countries provided President Park with an excuse to initiate extreme reform measures in 1972.

Although some 40 years have passed since then, if we are to establish a policy toward the United States now or even in the future, we must learn our lesson from Korea-U.S. relations back then.