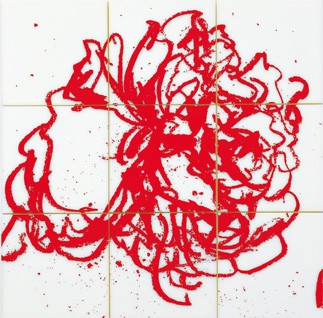 Painter Kim Jonak, 55, tries to infuse his paintings with the complex emotions he feels when he sees an object that he is planning to draw. For him, the paintings are not mere reflections of what he has seen; they also reflect how he felt when he saw it.

He paints flowers and fruit on acrylic panels with polyurethane, which is a material used for car paint. Although these are rather modern materials, some of the works still have the feel of black-and-white Oriental paintings.

Kim’s works are on display in the exhibition titled “Image et Memoire” at the Gana Art Center in Pyeongchang-dong, central Seoul. A total of 30 works, produced over the span of 10 years, will be shown. The works depict the change in his style in this period, from dark and serious to light and modern.

“The exhibit is about the intricate emotions of an artist of my generation,” Kim said at a press conference last week. He added that he does not belong to a young generation of painters nor to the older generation, but is somewhere in between.

Kim went to France to study art in 1994. He spent three years experimenting with a variety different materials, but one day he had a major breakthrough - with a bunch of grapes.

“I saw a multitude of complex elements in the grapes, contradictions like Western and Oriental, traditional and contemporary, concrete and abstract, and large and small,” Kim said.

He first started painting grapes and then moved to other produce such as peppers and pears. He also painted flowers and branches. In the process, his paintings began to take on a new style.

The works he produced during this period in the late 1990s have a dark and serious feel.

In a piece titled “Grape,” he painted acrylic panels the color of rusted steel. He even put real nails into the panels to make them look like real steel. Then, he attached papers on which he’d painted a bunch of grapes in black.

“I saw a huge amount of energy in trivial objects,” Kim said. “I had hoped that the inner workings of my consciousness would appear in my works.”

As time went by, his style started to change. His works became more modern and abstract. He started painting on white acrylic panels, using more diverse colors such as red, green, blue and yellow. He also began incorporating the use of polyurethane. With the use of these new materials, Kim’s most recent paintings have more of a pop art feel.

“The paintings give a new sensation that does not appear in oil paintings,” Kim said. “This is completely different.”

“The use of polyurethane is as light and pleasant as the acrylic panels on which it is applied,” said Kim Yeong-sun, an art critic. “It reflects the painter’s intention to express the lightness of being, which is prevalent in our society.”