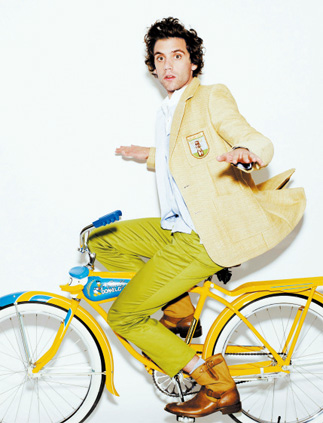 Brit-pop star Mika lives life in cartoon motion - a theme that extends to his wardrobe choices. Provided by Yellow 9

Lady Gaga may have some competition for putting on the most flamboyant show to have swept through Seoul - at least, with the impending arrival of ostentatious Brit-pop star Mika later this month.

Forget splashes of color - every aspect of this artist’s stage persona is saturated in cartoon hues, from the technicolor swirls of his album covers to the rainbow ruffles on his accompanists’ costumes.

So, as the Lebanese-born artist posted on his Twitter last month, “Seoul here we come,” in honor of his upcoming first show in Korea.

Fresh on the heels of his second studio album, “The Boy Who Knew Too Much,” the singer is expected to borrow from the stage stylings of Freddie Mercury (whom he’s often compared to), Elton John and David Bowie.

But don’t expect the wardrobe flair and glitter to upstage Mika’s vocal talent. His trademark operatic falsetto has made headlines as he’s toured around the world, with a show-must-go-on attitude that refused to be hampered by a foot injury during a gig late last month in San Francisco.

He broke onto the mainstream music scene in the United Kingdom in early 2007 with tracks like “Grace Kelly” and “Relax, Take it Easy,” both of which came from his aptly-titled debut album, “Life in Cartoon Motion.” His single “Love Today” from that album was nominated for a Grammy in 2008, the same year he won a BRIT Award for British Breakthrough Artist.

With notably counterculture-friendly lyrics - past song subjects have ranged from an extramarital gay love affair to celebrating sizable sisters - Mika has also proven popular among mainstream audiences. In Korea, his song “Big Girl (You Are Beautiful)” was used in a commercial for Asiana Airlines, while “Happy Ending” is featured in another ad for Kookmin Bank.

Ever the showman, Mika has been touring since even before the September release of his second album, appearing at the U.K.’s Bestival, then at venues across North America.

The Asia-Pacific leg of Mika’s tour kicks off just days after the upcoming release of his next single, “Rain,” an electronic-inspired dance tune that follows up the lead track off The Boy Who Knew Too Much, “We Are Golden.” Other stops this month include Sydney, Hong Kong and Tokyo.

At the Seoul show, expect to hear other upbeat offerings from his newest album, including the infectious “Touches You” and “Blame It On the Girls,” whose chorus is known to draw avid audience participation.

Mika will perform at 7 p.m. on Nov. 28 at Melon-AX in Gwangjang-dong, eastern Seoul. The venue is located near Gwangnaru Station, line No. 5, exit 2.