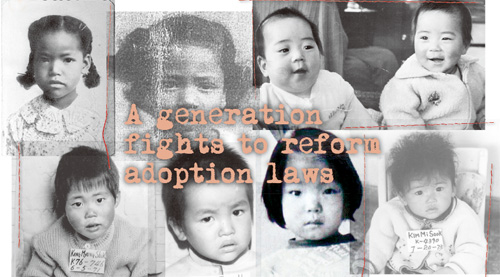 Six Korean adoptees filed an appeal with the Anti-corruption and Civil Rights Commission last year to request a probe into irregularities in their adoption documents and possible illegal procedures at local adoption agencies.

Now, they’re involved in a full-fledged battle to reform adoption laws and procedures, and they’re getting help from some heavyweights.

Adoptee rights and community groups as well as unwed mothers, the public interest law firm Gong-Gam and Democratic Party Representative Choi Young-hee have joined forces with the adoptees in an effort to convince lawmakers to revise the Special Law Relating to the Promotion and Procedure of Adoption.

The National Assembly has now taken up the issue and is exploring changes through a series of hearings. 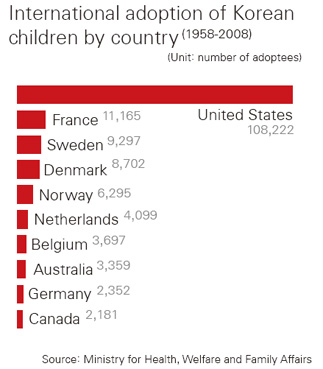 If their efforts succeed, the groups will drastically change the landscape of domestic and international adoption in Korea, a country which lawmaker Choi said at yesterday’s hearing said “still has a stigma attached to it as one of the major exporters of children.”

It would also rank as one of the few cases in the world where adoptees returned to their original country and changed adoption practices through legislation.

When they started this quest, the adoptees, hailing from three different countries, said their adoption records contained contradictory information. 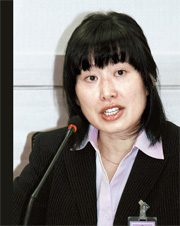 In one case, an adoptee only identified by her initials, SIA, said her adoptive parents in Denmark were informed by an adoption agency in 1977 that it did not have the records of her birth parents. But when SIA came to Korea in 1998 and asked for information about them, the agency did in fact have information about her birth mother. SIA also found that the adoption was done without her mother’s consent.

In another case, an adoptee only identified as PYJ said her adoption agency created a new identity for her when she was sent to Norway for adoption in 1975.

Their initial attempt to delve into the issue hit a brick wall when the civil rights commission dismissed the appeal, citing a lack of proper administrative procedures in Korea at the time of their adoption.

Taking on the law

The adoptees, however, did not stop there. Instead of filing another petition or begging for the release of their records at adoption agencies, they decided to try to revise adoption-related laws to find out the truth and improve the system.

According to the Ministry for Health, Welfare and Family Affairs, 161,588 Korean children were sent overseas for adoption from 1958 through 2008. Korea is the world’s fifth-largest exporter of children behind China, Guatemala, Russia and Ethiopia as of 2007, according to World Partners Adoption Inc.

“Most Korean adoptees are growing up in foreign countries and facing confusion over their identity. Even though they come to Korea to find their roots, there are few cases in which they are given accurate information on their birth or succeed in locating their birth parents. To improve the situation, we decided to hold a hearing on revising the Special Act,” lawmaker Choi said.

The proposed bill starts with the idea that foreign, and even domestic, adoption is not the best option for children and that public assistance should be given to mothers to help them raise their children, a concept that follows international adoption practices. It also incorporates the notion that adoption processes need to be more strictly regulated to prevent possible abuses by adoption agencies.

“The government wants to push domestic adoption, but all the children already have mothers,” said Jane Jeong Trenka, the president of the Truth and Reconciliation for the Adoption Community of Korea and one of the adoptees who filed the appeal at the commission. “The children can stay with their mothers. Single mothers should be given resources to raise their own children. It is still a matter of social prejudice in Korea.” 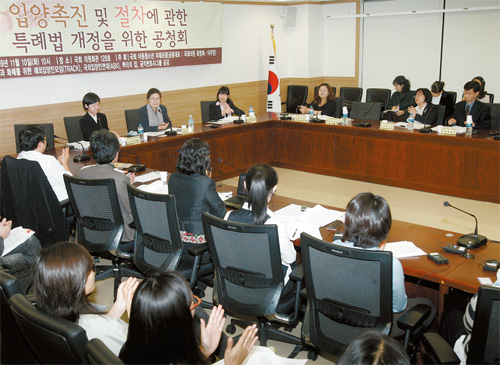 Trenka added that a number of adoptees had families but were reclassified as orphans before they were sent abroad for adoption. “Because their records were manipulated, only 2.7 percent of adoptees succeed in locating their birth parents,” she said.

One of the biggest obstacles that prevents these women from raising their children on their own is the social stigma they face as unwed mothers. Another is the lack of social welfare services available to them should they choose to raise their child.

Trenka was adopted by a couple in Minnesota in the United States in 1972 when she was six months old. In 2007, Trenka and other Korean adoptees founded TRACK to help get the government to fully acknowledge its past and present adoption practices.

Reverend Kim Do-hyun, who is the director of KoRoot, which provides accommodation for Korean adoptees returning to the country, echoed those thoughts.

“Behind the Special Law is an idea that adoption needs to be encouraged,” Kim said. “But adoption is not something that we should promote. Rather than pushing adoption, we should reinforce the original family to prevent further separation between mothers and their children.”

Adoption as a business

One of the major changes proposed by the bill drafted by the public interest law firm Gong-Gam is that it would require court approval for all types of adoptions - currently they’re needed only for domestic adoptions - and increase government intervention in matters dealt with mostly by private adoption agencies.

The adoptees say there needs to be more government involvement in adoption because as more adult adoptees reunite with their birth parents and gain access to their records, examples of dubious international adoption practices have surfaced.

TRACK has been documenting these cases through interviews with adoptees and their birth families. They found that in some cases an orphan hojeok (family registry) is produced for a child sent for international adoption, even if the child has a family. Contradictions were also found between the records held by adoptive parents and those kept by the adoption agency. In one case the child was malnourished at the time of adoption but the records sent to the adoptive parents overseas stated the child was healthy. In another case, a child was given up for domestic adoption but was sent abroad for international adoption.

The adoptee coalition believes such irregularities occurred because adoption agencies manipulated records to push international adoption, which is very profitable.

Another proposed revision would give women a minimum of 30 days to make a decision on adoption, which is standard in Western countries. There is no set period for this in South Korea.

Observers say women are often forced to sign an agreement on adoption almost right after giving birth. If the mothers change their mind, the agencies charge them for all expenses they’ve incurred, from child delivery to the shelters they run. They said adoption agencies tend to encourage adoption rather than telling the women that there are other options available such as raising their child on their own.

“Adoption agencies pressure you to give up your child,” Choi Hyang-sook, a member of the group Miss Mamma Mia, which is also part of the adoptee coalition, said at yesterday’s hearing.

“Adoption agencies provide adult adoptees with only partial information, citing the protection of their birth parents’ privacy,” Kim said. “The agencies have often falsified data to suit adoptive parents’ taste or to abide by the laws of the country to which they are sending a child. There were cases in which adoptees were classified as orphans when they were not. The more information they reveal, the more their reputation can be damaged.”

One adoption agency disputed the accusations. “There are records we can open but there are those we can’t,” said Choi An-yeo, a manager at Holt Children’s Services Inc., the biggest and oldest adoption agency in Korea.

Choi said things were different a few decades ago. “Then, it was possible to send an abandoned child abroad for adoption. If someone brought in a child and lied that he or she was a legal guardian, there would be no way for us to find out. We only have followed the laws and we will continue to do so,” she added.

Democratic Party Representative Choi is sponsoring the proposal while the Health Ministry is also drawing up its own bill. It is not certain how the government bill is going to be shaped but Park Sook-ja, the director of the Office for Child, Youth and Family Policy at the Health Ministry, said she generally sympathizes with the adoptee coalition. “We share similar ideas in general, but we need to take it one step at a time,” Park said.

The ministry has already held two hearings on the bill, however, Park said it is too early to talk about the bill as the final version has not been made yet.

Choi said the differences between the two bills will likely be ironed out before a unified bill is presented to the Assembly early next year.

Dozens of adoptees including Trenka attended the hearing yesterday in the hope that the bill Choi presented can transform adoption practices here.

Trenka commented, “Adoption may be an act of love, but all adoptions are meant to separate children from their mothers.”

“My mother was so emotional. I’d never seen a person so emotional,” she said. “She sat on the floor and poured her heart out.”

Trenka reunited with the rest of her birth family in the 1990s.

“Adoption is a big lie. Its success depends on everyone believing in that lie. They [my adoptive parents] wanted to believe in that lie but I could not do that.” Asked why she is devoting herself to creating the law, she said, “For my mother. My mother died but if I don’t try to change things, my suffering has no meaning.”