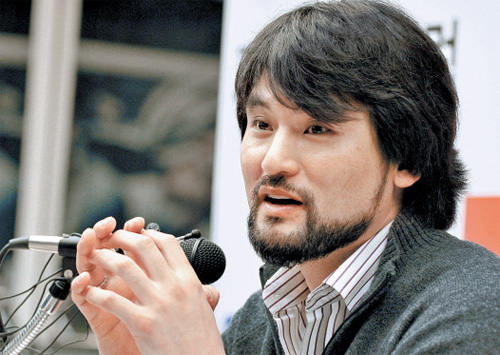 Park Chan-ho said that he wants to find a contender willing to give him a shot in the starting rotation at a press conference at his Park61 Fitness Club in Yeoksam, southern Seoul yesterday morning.

The 36-year-old veteran pitcher is coming off a one-year $2.5 million contract with this year’s National League Champion Philadelphia Phillies.

As the reigning champions from 2008, the Phillies made it to their second consecutive World Series but lost to the New York Yankees in six games. Park struggled as the fifth starter in the Phillies starting rotation early on in the season but went onto become an integral part of the Phillies’ bullpen in the latter stages of the regular season and the playoffs.

“I would like to find a team that’s willing to slot me in the starting rotation. It would be better if the team happened to be a team that can reach the World Series,” Park said at the press conference. “I need a good environment to perform well next season. If I had to place priority, I would like to play for a team with a good chemistry.”

The press conference stood in stark contrast to the one in January in Seoul when Park broke into tears during an announcement that he was signing with the Phillies. In this recent appearance, Park appeared confident and comfortable speaking to the press. Understandably so, considering his performance in the 2009 season.

Park got off to a sub-par start this season with three wins and three losses with a 4.43 ERA and was bumped to the bullpen. Park went onto shine in his role as a relief pitcher and posted two wins, two losses and an ERA of 2.52. Park showed plenty of velocity in his pitches after switching to a three-quarter release to relieve pressure on his back.

Based on his statistics, Park seems worth a bet. The Major League Baseball Players Association released the Elias Sports Bureau rankings for all 183 potential free agents yesterday. In the ranking, each player is given a grade of “A,” “B” or no grade. The grading is to determine draft pick compensations to the team losing the free agent. Park was given a grade of “B” which makes him a more affordable pickup for teams looking for a veteran.

Other veteran pitchers with a “B” grading in the Elias report were Randy Johnson, Andy Pettitte, Tim Wakefield and Jason Marquis.

“I had trouble sleeping after the loss in game six of the World Series,” Park said. “I would have to say I was satisfied with my performance this season. I appeared in four out of six games in the World Series. I take it as a sign of approval. I played my role to the best of my ability and it was a lot of fun. It was a valuable experience.”

Park said he has received a message from his agent stating that the Phillies are interested in re-signing him. Although he is clearly interested in a situation that would allow him a return to the starting rotation and the Phillies in all likelihood cannot provide that opportunity, Park stated his fondness for the city of brotherly love.

“I was very happy playing for the Phillies. In the past, I did not like the rough and boisterous Philadelphia fans. But it was great to pitch for such passionate fans. Fans recognized me wherever I went and referred to me by my new nickname, ‘chopper,’” explained Park.

Being hitched helped. “There are many married players on the team and we had many family-oriented events. I have to look at other opportunities but returning to Philadelphia would be nice, too.”