Banning booze to beat the flu

Banning booze to beat the flu 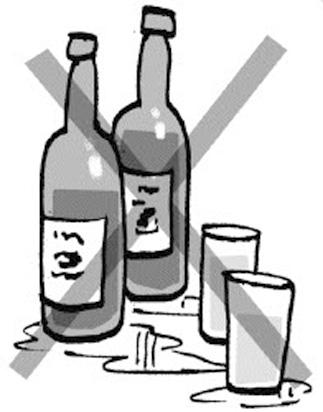 Drinking was a suggestion for health care in medieval Europe. It was necessary because many people contracted diseases or lost their lives after drinking water from contaminated springs or wells. Rather than bothering with boiling water to make it cleaner, people preferred drinking alcoholic beverages. In the middle of the 18th century, tea and coffee were suggested as alternatives to alcohol. However, people started worrying about drinking too much caffeine, and King Friedrich the Great of Prussia decried coffee and ordered people to drink wine, spirits and beer instead.

But similar concerns about health have always clouded attitudes to excessive drinking of alcohol. Governments in Scandinavia and the U.S. enacted prohibition laws in the earlier part of the 20th century, but they soon discovered that humans are more likely to desire something that has been banned. To slake their collective thirsts, drinkers went to church for a drop of red wine instead. The consumption of wine at Communion services increased from 2.14 million gallons in 1922 to near 3 million gallons in 1924.

Even the amount of whiskey doctors prescribed ostensibly for medical purposes amounted to 1.8 million gallons per year. Besides such lawful trickery, it was obvious that various illegal means, including smuggling and moonlighting, were rampant.

The temperance measure promoted by Mikhail Gorbachev, former secretary general of the Soviet Union, on a large scale in 1985 ended in failure, too. Although the price of vodka was increased and the sales volume was drastically reduced, the number of alcoholics increased since heavy drinkers resorted to coarse substitutes. One old joke ran that the public was so angry with Gorbachev for initiating anti-drink laws that one man, fed up with waiting in line for a bottle of vodka the whole day, headed toward the Kremlin swearing he would shoot Gorbachev. He came back a little later, saying, “The queue there is longer than here!”

Banning booze is not only unpopular with the masses, it delivers a blow to the national coffers by reducing revenue from taxes on liquor. Nevertheless, governments cannot neglect the health of their people and are often compelled to declare war on alcohol. Russia, which tops the world drinking league with a hefty 18 liters of alcohol per head annually, is again promoting a similar temperance measure to that promoted by Gorbachev. The Russian government cannot remain a mere spectator to the reality of half a million people dying from drink every year.

In Korea, the spread of the A(H1N1) influenza is leading a crusade against alcohol. It has been reported that some drinkers are cutting back because doctors say excessive partying might impact their immunity. So I wonder whether the flu can rein in drunkards that even the governments have failed to control.