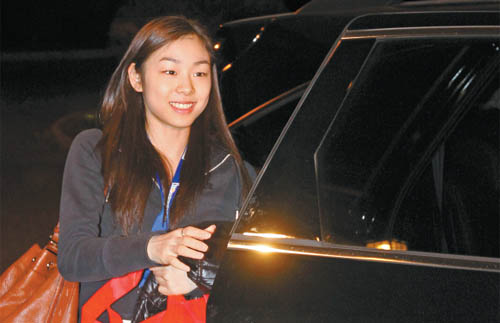 Kim Yu-na arrives in Lake Placid, New York after a seven-hour drive from her training ground in Toronto, Canada. The competitors are to go through practice rounds at the Herb Brooks Arena (1980 Rink) today and will compete in Skate America short and long programs over the weekend. [YONHAP]

Skate America is the fifth of six 2009-10 ISU Grand Prix of Figure Skating events. Skate America will be held over the weekend at the Herb Brooks Arena (1980 Rink).

Kim, who trains with Canadian coach Brian Orser in Toronto, Canada, arrived in Lake Placid yesterday after a seven-hour drive from Toronto.

“I want to execute a clean program without any mistakes. I tried not to focus too much on scores in the past but my ideal goal at this point is to maintain a score in the 200 range,” Kim said to the press upon arriving in Lake Placid. “I have learned that many fans are taking a keen interest in the Skate America event due to my high score [210.3] at the Trophee Bompard in Paris last month. To be honest, it can add to the pressure but I will maintain my focus.”

Kim has been on a near perfect pace since taking the 2009 World Championships in Los Angeles with a record-setting score of 207.71. Kim topped her own personal best with another record-breaking performance at the season opening Trophee Bompard event in Paris last month. Although the 19-year-old world champ was able to set a new world record, she can improve on the 210.03 score she received in Paris last month. Kim failed to get off a flip jump during her routine and feels she can also improve her spins and spirals.

“At the free skating event in Paris, my spin and spiral routines were not graded very high. We fine-tuned my entire program by working on the finer details,” she said.

She has stated she received favorable reaction to her costumes and will stick to the same outfit in Lake Placid. Kim will once again skate to a James Bond medley in the short program and George Gershwin’s Piano Concerto in F in the long program. Travelling by car for the first time to an event, Kim explained she does not feel fatigued and is in good condition for the upcoming competitions. Having dominated her rivals in her past two major competitions, Kim does not have a clear rival to push her this season but with the 2010 Winter Olympics coming up in February in Vancouver, the upcoming ISU Grand Prix events will be a good stage for Kim to hone her program.

“With the Olympics fast approaching, many skaters are feeling the pressure. The key is for the skaters to shake off the pressure and maintain their focus,” Kim said. “I am currently in top condition but you never know what might happen. It’s important to maintain my composure in case of unexpected circumstances.”

Kim will compete in the short program on Saturday and will finish off with a long program on Sunday. The last of the six ISU Grand Prix Figure Skating events is Skate Canada and will be held in Kitchener, Ontario from Nov. 19-22. The final event of the year is the Grand Prix Final in Tokyo, Japan from Dec. 3 to 6. The top six skaters with the best scores this season will compete for the season title.