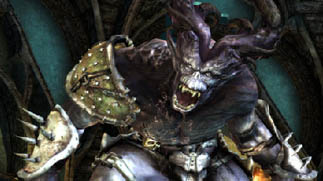 In “Baldur’s Gate,” BioWare created one of the classics of the computer role-playing genre. Its world was immense and its story engrossing, and it was really, really hard.

Now, 11 years later, the developer has released the spiritual successor to “Baldur’s Gate,” “Dragon Age: Origins,” and it’s also long, difficult and involving, with a cliched main story line the only mark against an otherwise majestic experience.

Leaving behind the Dungeons & Dragons setting of “Baldur’s Gate” has allowed BioWare to introduce a world that’s much bloodier and more adult than any they have ever attempted. I can’t help but grin when my party comes out of a huge battle, their faces and armor dripping with blood. I suppose some splatter is inevitable when you’re gutting wolves and carving out ogres’ hearts.

And, like in BioWare’s other flagship series “Mass Effect,” there’s sex, sort of - run-ins with Fox News last year seem to have scared them into putting underwear on everyone involved, so perhaps it’s more appropriate to call it passionate dry humping.

You play a “gray warden,” part of an ancient line of wandering guardians charged with protecting mortals from the Blight - a periodic invasion of the waking world by “darkspawn” from the Fade, the spirit world we see in our dreams.

It’s all suspiciously similar to BioWare’s last big fantasy effort, “Neverwinter Nights 2” - bad guy demons from the spirit realm, a lord of shadows behind it all - and the middle part of both games is spent carrying out errands to win over allies in the fight against evil.

There must be other fantasy stories to be told. The expansion to “Neverwinter Nights 2,” “Mask of the Betrayer,” found ways to maintain a sense of mystery about its enemy and even brushed up against interesting questions about faith and the divine. So why do we keep going back to the same old Manichean retellings?

The developers may have gone with a boring over-arching story, but I must at least give them credit for building an insanely detailed world, one that rivals the complexity of the Forgotten Realms. There are believers and apostates, oppressed and oppressors and exquisitely planned cultures and mythologies. And though the narrative plays out in the same general way every time, there are many different iterations. The character animation and voice acting are superb, and the best parts of Dragon Age come when it eschews the skeleton-crushing dungeon slogs and sends you on one of dozens of whimsical side quests. Your individual party members also have goals and stories to tell, and if you win their support and give them the right gifts they’ll take you along for the ride.

This is not an easy game, and even small battles require planning and strategy, but the interface is intuitive and setting up your party to face the onrushing hordes is seamless. How you level up is vital, and the game won’t help you with recommended stats. Make the wrong choices and you will be punished by death after death. Each time you’re struck down, you acquire a random “injury” that makes the next encounter more difficult.

“Dragon Age” is a beautiful, expansive, challenging game, and fans will get a kick out of how closely it hews, in strategic gameplay and questing structure, to RPGs past. Perhaps in the inevitable downloadable content and sequels we can finally look forward to the groundbreaking genre storytelling this developer is capable of delivering.