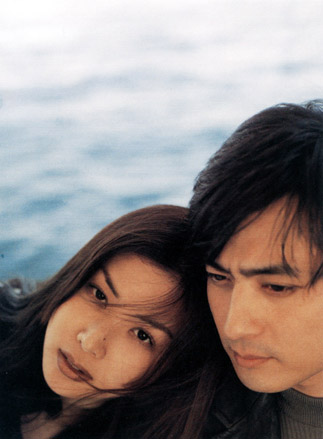 Actors Jang Dong-gun and Ko So-young recently announced that they are a couple, which instantly earned them a nickname that is the Korean equivalent of “Brangelina.” [JoongAng Ilbo]

In particular, actors are becoming more like their Hollywood counterparts, with more star couples coming out of the closet with their relationships, which was once uncommon.

The relationship of Hyun Bin and Song Hye-kyo, two hallyu stars who went public as an item in August, was the most talked-about example of this trend - until last week.

Two high-profile Korean actors, Jang Dong-gun and Ko So-young, surprised the industry last Thursday when they went public with their relationship of about two years. 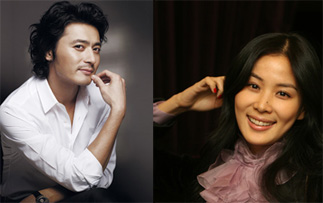 The public’s reaction was immediate and the two were instantly given a nickname that is the Korean equivalent of “Brangelina,” the moniker often used to refer to Hollywood super-couple Brad Pitt and Angelina Jolie.

Jang is a leading hallyu star who gained recognition and a solid fan base with leading roles in films such as “Friend” and “Taegukgi: Brotherhood of War.” The handsome 37 year old has long been considered one of the nation’s most eligible bachelors, a label that was underscored with his role in the recent “Good Morning President.” In the film, he plays a young, and single, fictional Korean president.

Ko, who has kept a relatively low profile, was one of the most popular Korean actresses in the late 1990s and is known as the reigning beauty of the moment. Her last project was the SBS-TV drama “Blue Fish” in 2007.

Jang and Ko have a lot in common - they are both 37 years of age and both had their debut in 1992. The two are also among the few Korean actors who have maintained strong careers as commercial spokespeople. In addition, both actors have large fan bases, despite their infrequent appearances in the media.

Media reports saying that Jang and Ko have been dating and are getting married in December caused a stir when they started circulating on the Internet early last Thursday afternoon. At first, the news looked to be just another round of rumors about two top stars. But things changed when Jang’s management agency AM Entertainment issued a press release shortly thereafter saying that the two are dating.

“Jang and Ko co-starred in the 1999 film ‘Love Wind, Love Song’ and they have been good friends ever since, but their friendship recently developed into romance,” the release said. “But there is no detailed plan yet for their wedding,” it added.

Later that day, Jang confirmed the report in a posting on his fan site.

“The news reports must have surprised you .?.?. as you all know, So-young and I have been friends for a long time and we’ve become very close. We’ve been a pillar of strength for each other since I don’t know when,” Jang wrote. “I want this relationship to last and will let you know when I have good news for you.”

The statement sparked rumors that the two will marry. Not only have the couple revealed their relationship instead of hiding it, which is a near-certain sign of marriage in Korean society, they are also at an age where marriage is considered long overdue.

After news about the couple broke, fans focused on Jang’s appearance last December on the now-defunct “Sunday Night with Park Joong-hoon” show hosted by Jang’s close friend and actor Park Joong-hoon. In the rare TV appearance, Jang talked about his ideal mate, saying she would be a dark-skinned woman with long hair, slightly creased eyelids, a small but sharp nose and V-shaped face - qualities that all correspond to Ko, who was already dating Jang at the time.

Jang also said on the show that he felt a stronger inclination to get married than before, which is fueling predictions that a marriage between the two may not be far into the future.