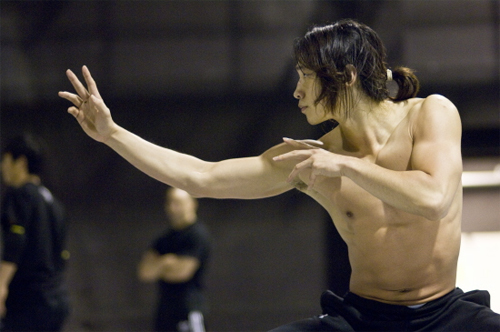 In the film, Rain plays Raizo, an orphan who is trained by a secret ninja clan to become a deadly killer. Provided by Warner Bros. Korea

Blood splatters across the screen as chains, single and double swords and throwing stars appear one after the other in a series of breathtaking action scenes from “Ninja Assassin,” the new martial arts flick directed by James McTeigue, who directed the 2005 film “V for Vendetta,” and produced by Joel Silver and the Wachowski brothers, famous for the “Matrix” trilogy.

Martial arts movie lovers and Wachowski brothers fans are sure to be drawn to the film.

Koreans fans are likely to be interested in the film for another reason. The film stars Rain, the Korean pop singer who is playing his first leading role in a Hollywood movie.

The film is Rain’s second collaboration with the Wachowski brothers after “Speed Racer,” where he made his Hollywood debut. One of the differences here is that the brothers are now the producers, not the directors, and Rain is not in a supporting role, but the lead.

“It is always enjoyable to work with the Wachowski brothers, who both have active imaginations and the ability to create whatever they are imagining,” the 28 year old said at a packed press conference on Monday in Seoul.

Rain also spoke about how it felt to be working with a Hollywood crew for the second time as well as about the challenges of dealing with learning longer lines in English.

“In the beginning I was a little bit nervous about working in the Hollywood system, but later I found it very efficient and well-organized. It was more enjoyable than it was hard to follow,” he said. “I’ve moved up from a supporting role [in Speed Racer] to a leading role [in Ninja Assassin] and my lines have increased accordingly, which I think is natural, and it’s something I appreciate.”

In Ninja Assassin, Rain plays “Raizo,” an orphan who is raised and trained by a secret ninja clan to become a deadly assassin. But after witnessing the merciless execution of his friend, Raizo breaks with his clan and plots revenge.

“The thing the directors wanted from me the most while we were shooting was that I put my emotions into my acting rather than focusing on speaking perfect English,” the actor said. 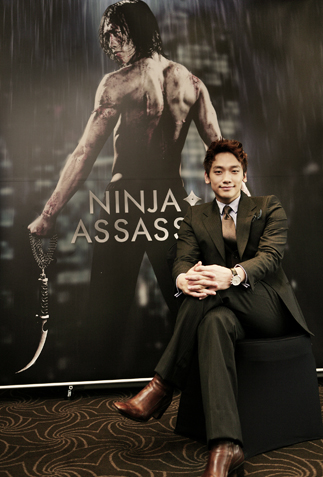 Rain says he hopes “Ninja Assassin,” his second Hollywood project, will be a box office success, which he believes will open more opportunities for Asian actors in Hollywood. Provided by Warner Bros. Korea

Rain’s English-speaking ability is better than expected in this film, which could give him a better chance of success in Hollywood, and that’s seems to be where he’s headed.

“I do hope that Ninja will be a box office success because everyone involved in this movie worked so hard. But regardless of whether it succeeds or not, Ninja will always remain as a very important movie for me for the rest of my career as an actor.”

Rain’s first movie in Hollywood, Speed Racer, was not a box office hit. Still, the singer-turned-actor said he was okay with how things turned out.

“Speed Racer was not a box office hit, but I still believe that it was a milestone for me,” he said. “It was my first exposure to Hollywood, and the directors and movie people there got to know me because of the film. It opened up a lot of opportunities for me, including Ninja Assassin, so I’m quite satisfied with that.”

Whether this film will be a hit or not remains to be seen. However, as seen at a recent press screening, the film lacks a well-organized plot, which may fail to convince audiences of its appeal as a gripping story.

Still, there is enough in the film to keep audiences engaged. Rain fans in particular are likely to be taken with his scenes, where his well-sculpted physique, the result of a rigorous six-month training regimen, is on full display.

Though Rain denied that he and his character have anything in common, seeing Raizo go through intensive training to become a ninja may resonate with Rain fans, who have watched the object of their affection strive to become the best in his field.

“We felt that the pure martial arts film is a kind of a sub-genre that hasn’t really had its due in the U.S. We were always talking about doing something like taking the legend of the ninja, which dates back to the 14th century, and dropping this silent killer into a truly modern world,” producer Joel Silver said in an earlier interview, when speaking about how his team had come up with the idea for Ninja Assassin. 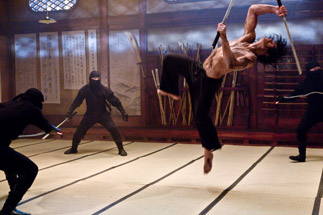 In the film, Rain plays Raizo, an orphan who is trained by a secret ninja clan to become a deadly killer. Provided by Warner Bros. Korea

“I’ve always loved the genre, but it seemed like no one had made a serious ninja movie in a long time, at least not in the West,” J. Michael Straczynski, one of screenwriters, noted.
“Is it nature that makes you the person you are, or is it nurture? That is a central theme of Ninja Assassin,” director James McTeigue said. “I feel as though we did what we set out to do and made a modern-day ninja film that has incredible action but is also grounded in great characterization.”

Ninja Assassin will open in South Korea on Nov. 26, a day after its U.S. release.