The section of the fortress wall from the top of Mount Nak to Hyehwamun gate was recently rebuilt. By Kwon Hyuk-jae

The ancient fortress wall that still circles parts of Seoul represents the border that once ringed Hanyang, the historical capital of the Joseon Dynasty (1392-1910).

In its prime, the wall stretched 18.2 kilometers (11.3 miles) around the capital, a distance that initially seems possible to traverse within a day. But as I recently discovered on an expedition around the remnants of the wall, it actually would have taken three days given the terrain.

“The fortress wall is built around the four mountains in Seoul - Namsan, Nak, Bukak and Inwang - and therefore would have required a lot more effort to walk around than expected,” said Yu Guen-pyo, who has been studying the history of Seoul’s fortress wall for a decade.

Yu led me and a JoongAng Ilbo photographer on a journey around the wall, taking us both on and off the beaten path. He divided our expedition into three segments, each of which highlight a different part of Korea’s history.

Our trek was easy and relaxing at first. But it surprisingly turned out to be a taxing adventure at certain points.

Before the expedition began, Yu advised us to wear hiking shoes, yet neither I nor the photographer paid any heed. We didn’t actually think we would need such rugged shoes, assuming the paths, trails and roads we would be taking were located in the inner part of the fortress wall where everything would be pleasantly mild and easy.

The first leg of the expedition actually took us outside the wall, where we were surrounded by the verdant forests of Mount Namsan. The height of the wall reached six meters (19.7 feet) at certain points, and we even had to blaze our own path through the “jungle,” much to my surprise. We faced endless obstacles and had to deal with constant pain from sharp branches that pierced our skin.

Nevertheless, I was mesmerized by the wall, which strengthened my resolve to continue our expedition despite scrapes, swollen ankles and other hurdles.

This part of the trek presented a side of Mount Namsan that most locals haven’t seen. It was an enlightening experience to learn that the stacks of rocks we pass by every day are actually the remnants of an ancient wall.

Trekking along the fortress wall can be as easy or difficult as you’d like, depending on the course you choose. Each of the routes I took offered up a different experience.

On the third course, which snakes its way from the Changeuimun gate back to the Namdaemun gate, you can get a glimpse into Korea’s modern history.

The fortress wall, you’ll discover, is actually very close to our everyday lives. It surrounds us in the form of overlooked stacks of stones in construction sites, sections of walls in the Naksan slum and the foundations of newer buildings.

Much of the wall is gone, destroyed as a result of Japanese colonization and Seoul’s rapid expansion as it hurtled toward industrialization. But plenty remains, if you know where to look. The wall is invisible under our ignorance, and thus is only recognized by those with knowledge of its existence.

This route’s main attraction is the famous Mount Namsan. The fortress wall that once surrounded the edges of Namdaemun and snaked its way to the mountain have mostly been destroyed. The only remnants along this section are located past the old Namsan botanical garden. The outer side of the wall in this area is covered in moss and robed in green, complementing the beauty of the mountain, which lies 262 meters above sea level. Though Mount Namsan might look a little bare from a distance, it is in fact deep and rich, containing steep slopes blanketed by thorny plants and pine trees.

During the Joseon Dynasty, Namsan was the main landmark representing the capital. The first ruler of the period, King Taejo, built the wall in the early 1400s. Much of it, however, was destroyed in the first half of the 20th century under Japanese occupation. The Japanese built the Shinto shrine over the rubble and forced Koreans to pay tribute. The American army base and the Tower Hotel also sit on land where the wall used to stand.

The section where the shrine once stood is being rebuilt as part of a restoration project. It is impossible to see the sections of the wall inside the American military base, which is off-limits to the public.

But if you stroll along the outskirts of the base, you will eventually see the continuation of the wall.

In order to get the best view of the fortress wall, follow the route that takes you past the Tower Hotel, turn left at the Shilla Hotel and walk down toward the Jangchung Gymnasium. Beyond this area, you will find that most of the wall is destroyed. But you will able to see parts of the wall in between the dilapidated houses in the residential area neighboring the gymnasium.

Part of the wall also has been found recently in Dongdaemun Design Plaza and Park and is now open to the public.

Expedition tip: If you are planning to start your expedition in the morning, come prepared with a sack lunch and eat it at the pavilion in front of N Seoul Tower, which features a fire-lighting event at the beacon there starting at 11:30 a.m. every day except Mondays. It provides a magnificent way to spend the lunch hour.

This course offers the most intact sections of the wall.

Most of the wall from Hyehwamun to the Seoul Science High School has been destroyed.

But on Mount Bukak, you can see plenty of sections of the actual wall. These areas were previously off-limits but opened to the public in 2007. 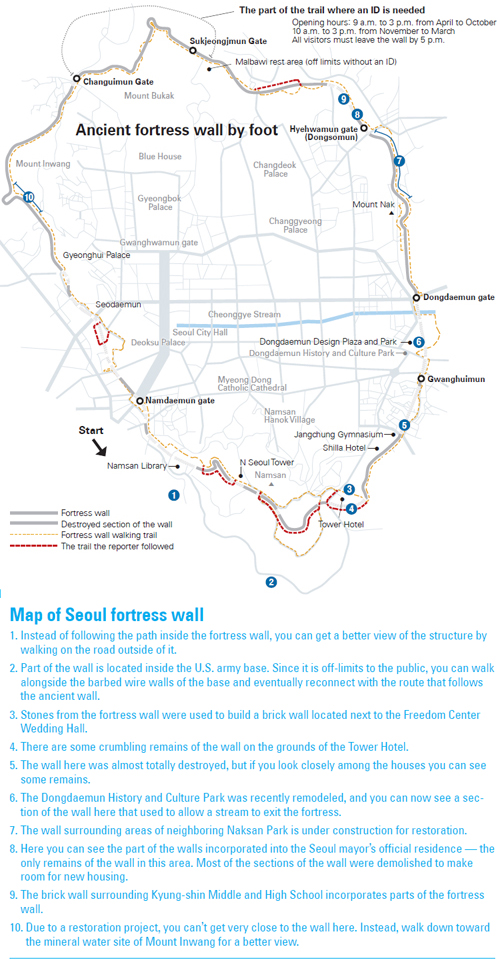 Here you can really feel and experience the history instilled within the wall. But you can also get a sense of the tragedy behind it as well. During the Japanese colonial period, huge chunks of the wall here were destroyed to make way for road construction. The Dongdaemun gate portion remains, standing alone and isolated in the middle of the road.

In some areas, the fortress wall became part of the fences that surround the slum in the Naksan area, and there’s also a church that was built on top of the wall’s foundation.

Be sure to look closely at the stones on the portion of the wall stretching from the Dongdaemun gate to Naksan Park, which have numerous letters engraved on them.

Divided into a total of 97 sections, each segment has letters indicating who built the wall and where the builder was from. If part of the wall was damaged, it was that person’s responsibility to fix the problem.

The exploration path along this area is smooth and well-managed, but due to numerous weeds and the embankment, you won’t get a great view of the wall.

By traversing this path, you’ll eventually encounter the Hyehwamun gate, which was the main entrance to the old capital in the north. The actual north gate Sukjeongmun and the smaller gate Changuimun were closed during the Joseon era due to reasons related to feng shui.


Expedition tip: In order to enter the Bukak route, you need to fill out an application and bring identification. Pictures can only be taken in some areas. Entrance is allowed from 10 a.m. to 3 p.m. daily except for Mondays, when it’s closed. The stairway at the Changuimun gate is steep and requires caution.

The only wall remaining along this course is at Mount Inwang, which offers a great view of the city and other unique attractions. There are various types of peculiar rocks in the shape of everything from a train to a book to a hat, each of which holds a unique story.

If you pass the peak of the mountain, you will see a rock called Seonbawi, which resembles the image of a monk. There’s an interesting story behind this rock, as there was a fierce debate as to whether to include it inside or outside of the wall. The king at the time could not make a final decision. After a winter storm, the wall was built along the area where the snow melted, leaving the stone outside of the wall. And that settled the debate.

On this path you have to search for traces of the wall stretching from the Donuimun gate site to the Namdaemun gate, as if on a treasure hunt. But that’s part of the fun. By walking this route, you can pick up the pieces and put them together to form the history of Seoul.

After passing the Donuimun gate, there are two places where the wall can be seen. Opposite China Ministries International, there is a construction site where the wall is heavily damaged. You can also see the wall behind the road of Munhwa Ilbo’s headquarters.


Expedition tip: Mount Inwang is open 24 hours a day except for Mondays, when it is closed. Descending from the mountain, you will also be able to view parts of the wall near residential areas.