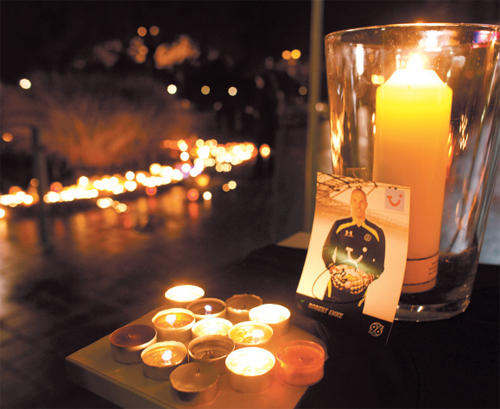 Candles are lit in front of a photo of goalkeeper Robert Enke at a football stadium in Hannover, northern Germany, early Wednesday. Robert Enke, the Hannover 96 and Germany national team goalkeeper, killed himself by apparently intentionally getting hit by a train on Tuesday. He was 32. Hundreds of supporters mourned in front the stadium in Hannover. [AP]

HANNOVER, Germany - German international goalkeeper Robert Enke has been killed after he threw himself under a train at a level crossing, police said on Tuesday.

“There has been fatality at a level crossing at Neustadt am Rubenberge,” police spokeswoman Martina Stern told AFP. “[Enke] threw himself under a train and died of his injuries. It was definitely suicide,” she added.

Jorg Neblung, a close friend and advisor to the six-times capped goalkeeper, also confirmed it was suicide. 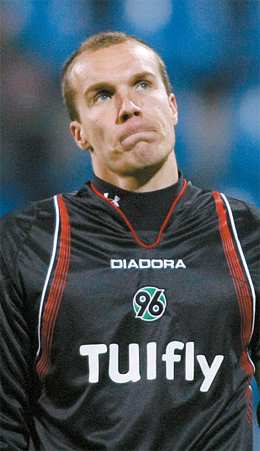 “Robert took his own life shortly before six o’clock [1700 GMT]. A press conference in Hannover on Wednesday will reveal more details,” he said.

The 32-year-old Germany and Hannover 96 goalkeeper - who leaves a widow and a daughter of eight months who they adopted in May three years after their two-year-old daughter died of a heart illness - had been suffering from an intestinal infection.

He pulled out of the Germany squad two days ahead of their 4-0 World Cup qualifying victory over Azerbaijan in early September.

However, recently he had professed himself delighted to have returned to training last month.

“It has been a long time, almost a quarter of the season. However, once I resumed training I felt really well,” Enke had said. He played his last match for the club in Sunday’s 2-2 draw with Hamburg.

His death left those closest to him both personally and professionally in total disbelief.

“We’re in shock. I don’t know what to say,” said national manager Oliver Bierhoff, who along with national coach Joachim Lowe informed his fellow international teammates - who are preparing for a friendly match against Chile this weekend - of the tragedy.

His club President Martin Kind was left stunned. “It is a total catastrophe. I am finding it hard to understand,” Kind said.

Later around 300 of the club’s fans and several of his clubmates gathered outside the club’s offices as a mark of respect with some laying down bouquets of flowers and lighting candles.

Enke was understudy to then first-team goalkeeper Jens Lehmann during the 2008 European championships and had been in line to fill his boots before being he was taken ill in September and October.

During that time his rival Rene Adler increased his chances of taking over the role in the national team, which has qualified for the 2010 World Cup finals.

Enke had also at one time been linked with a move to German giants Bayern Munich where the former German Under-21 international Michael Rensing had not impressed in his first season between the posts.

However, Uli Hoeness, Bayern’s general manager, had made clear they were not interested in paying the 10 million euros ($15 million) transfer fee. Several people had advised Enke, who had previously spells at Benfica, Barcelona and Tenerife, to leave Hannover for a more prestigious club and one that was playing in European club competition so he would improve his chances of becoming German No. 1.AFP