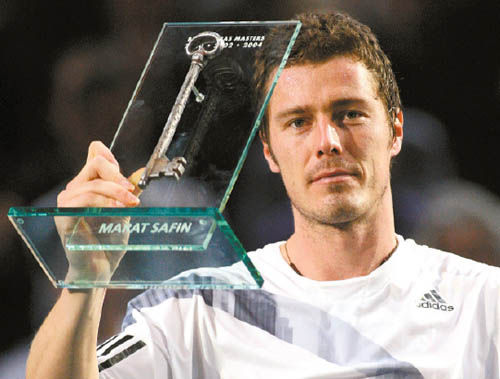 Marat Safin, of Russia, holds the key of the Bercy stadium, a farewell trophy to mark the end of his career, during BNP Masters indoor tennis tournament in Paris, on Nov. 11. [AP]

PARIS - Rafael Nadal admitted he was “very lucky” after edging Nicolas Almagro 3-6, 7-6 (7/2), 7-5 in the second round of the ATP Paris Masters on Wednesday, after Marat Safin bowed out of the sport.

World No. 2 Nadal lost the first set before his Spanish compatriot, who had never taken a set off Nadal in four previous meetings, spurned five match points in the second. Nadal dominated the second-set tie-break to level the match but fell 3-1 down in the decider, escaping a 4-1 deficit only thanks to a Hawk-Eye call.

Almagro required treatment on a thigh problem after Nadal had fought back to 3-3 but then broke for a 5-3 lead as he closed in on a memorable upset. Nadal roared back again though, taking full advantage of his opponent’s decreasing mobility to win the match in three hours and 14 minutes and set up a tie with 14th-seeded countryman Tommy Robredo, who beat Czech Tomas Berdych.

“I played great tennis in only one moment, but in the rest of the match I didn’t play well,” Nadal said in reference to his comeback from 5-6 and 0-40 down in the second set.

“I am very lucky to be in the [next] round. That’s the truth. I played bad but I won, which is the one positive thing.”

Safin announced his retirement earlier in the year and the Russian former world No. 1’s tempestuous career came to an end when he lost 6-4, 5-7, 6-4 to fifth seed and reigning U.S. Open champion Juan Martin del Potro. “This day will stand out for a long time, until I pass into a different world,” Safin, a three-time winner here, told the crowd at the Bercy arena during a special post-match ceremony. “This day will be where all the memories of my career will stay, all in one box.”

“I didn’t feel that great on the court,” said Djokovic, who beat world No. 1 Roger Federer in the Basel final on Sunday. “It was probably a long week in Basel that affected that. But I got a victory and that’s what matters most. Generally speaking I’ve picked up great form in the last two months.”

Soderling is one place outside the eight qualifying berths for the year-end event but needs to at least reach the final here to stand any chance of securing one of the last two available spots and will meet Russian Nikolay Davydenko, currently seventh in the race to London, in the next round.

The world’s top five players are all in action on Wednesday, with Federer and Andy Murray hoping to follow Nadal, Djokovic and del Potro into the third round later.

The 2.75 million euro ($4.12 million) event is the final Masters tournament of the year. AFP