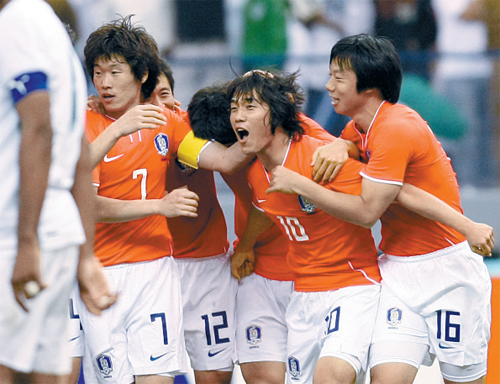 Already dealing with a knee injury to its captain Park Ji-sung, the national team will have to do without its best goal-getter for its two matches in Europe over the next week.

Park Chu-young is unavailable, his club, AS Monaco, announced yesterday.

“Park Chu-young injured his hamstring during a match against Grenoble F38 [on Nov. 7] and was substituted for [Frederic] Nimani at the end of the first half. Park will not be able to attend the international friendly matches against Denmark and Serbia,” stated a report on AS Monaco’s Web site.

Park was to meet with the national team in London for the flight to Copenhagen, Denmark, for this weekend’s friendly against the Danes and the match against Serbia a few days later.

“We got a call from AS Monaco at Heathrow Airport in London, England while waiting to transfer onto a flight to Denmark. AS Monaco officials expressed their wish to retain Park and Huh and his coaching staff have decided to respect the team’s decision,” a Korean Football Association official said.

Park recovered from an injury to his right knee earlier this month but felt a twinge in his hamstring during the game against Grenoble F38 last week. According to Huh, Park had been keen to join the squad for two-date European tour.

“We will include Park on our roster for the Denmark game and assess his injury. We will not push him into the starting lineup, though,” national team Manager Huh had stated before leaving for Europe. Park is currently his club’s top score with eight goals, making his loss to the national team that much keener.

The national team will also have to devise a game plan that doesn’t rely too much on Park Ji-sung, the skipper. The Manchester United midfielder will travel but he has been hampered by a knee injury this season and has not appeared for 11 consecutive games with the Reds.

A Manchester United team physician will accompany Park on the trip. Although Park has stated he will play in both games, he is expected to play a limited role.

The loss of the two key players means an opportunity for players like Lee Dong-gook, Lee Keun-ho, Seol Ki-hyeon and Kim Do-heon to impress. The two Lees are the only viable option up front for Huh. Seol and Yeom Ki-hun are best suited to wing positions. Huh is expected to use a combination of Lee Dong-gook and Lee Keun-ho or Lee Dong-gook and Seol to spearhead his attack in the upcoming matches. Lee Dong-gook has impressed in the K-League this season with 20 goals. Although he has yet to score since rejoining the national side in August, the upcoming games will be a golden opportunity to reverse that trend.

Kim Do-heon will benefit most from Park Ji-sung’s injury, and defensive midfielders Cho Won-hee and Kim Nam-il should also get plenty of playing time if Huh decides to test a new combination of players in both the midfield line and at the forward positions.

The national team kicks off its two game European tour with a match against Denmark on Nov. 15 at 4 a.m. (KST) and then will face Serbia on Nov. 18 in London, England at 11:30 p.m.