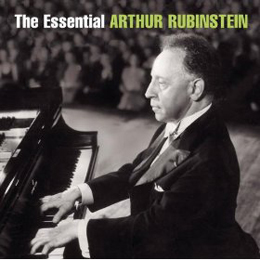 At the beginning of the Albeniz “Navarra,” Arthur Rubinstein himself can just barely be heard announcing the piece. Perhaps it was an encore at a live concert. The audience murmurs with delight and anticipation at the prospect, and also, perhaps, at his Spanish pronunciation. After listening to disc one, I found myself murmuring with delight and anticipation as well.

The recording dates are from 1959 (Chopin “Ballade”) to 1972 (a wonderful Schubert “Piano Trio No. 2” with the incomparable Henryk Szeryng, violin and Pierre Founier, cello). This era is considered by many audiophiles to be the “Golden Age” of stereo recording. While Sony has not included references for the original releases (an annoying oversight), I believe the Franck “Symphonic Variations” is from an RCA “Living Stereo” release. These recordings are considered by collectors to be some of the best sounding ever made. My guess is that most, if not all, of the recordings presented here come from the RCA catalog, and, in this particular era, that is a very good thing. Rubinstein plays with finesse and sophistication throughout. The lovely Chopin “Waltz in A flat Major: ‘L’adieu’” is just right: simple and sweet. But then, one is left to marvel at the extraordinary power and athleticism of the Chopin “Mazurka in D”.

His performance of the very familiar Chopin “Nocturne in E flat major,” a piece most third- or forth-year piano students have attempted, reminds one what “virtuoso” means: every note and phrase effortlessly connected, pulsing forward and lyrically sublime.

These discs are a very good offering from Sony - great performances by a master at the height of his physical and interpretive gifts. By Fred Applegate, Contributing writer