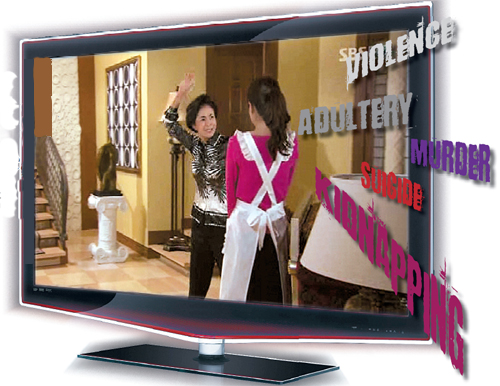 What do you get when you combine a broken family and betrayal, throw in some adultery and revenge and top it all off with a dash of violence? A daytime soap opera.

Provocative, exaggerated and often unbelievable story lines have defined daytime soap operas almost as long as they’ve been in existence. The formula is a no-brainer: The more dramatic, the better. Sprinkle in a few scenes where a mean mother-in-law slaps her son’s wife on the cheek or a guilt-free man lashes out at a woman with chauvinistic, insulting remarks and chances are the ratings will soar.

While this is nothing new in the world of daytime soap operas, these racy and controversial elements are quickly creeping into prime-time dramas as well, when children are more likely to see them. They’re also getting even more provocative - and therefore controversial - as shows go all-out to gain more viewers.

The trend has even given birth to the word makjang, which literally means “blind-end,” implying that things have gone all the way to one extreme and can’t get any worse. Koreans call soap operas with these outrageously over-the-top scenes makjang dramas.

Now the debate over these shows - what types of programs can be classified as makjang dramas and whether they should be regulated - is heating up as some observers and officials say they are eroding the nation’s morals and possibly harming children as well.

While upset parents are among those questioning these dramas, the shows are now drawing attention from the government as well.

“A husband and his mistress lying on the bed together while the wife watches, an indication of spousal rape, a name-calling quarrel between a husband and a wife - I thought all of these scenes were crazy,” Choi Gu-sik, a ruling Grand National Party lawmaker, said last week during a parliamentary questioning of the government’s education, social and cultural policies. 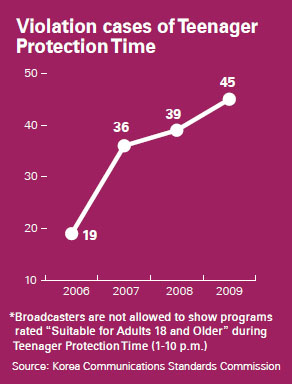 He was referring to the MBC program “Bapjwo” (Prepare a Meal) and the SBS show “Wife’s Temptation,” deemed the latest additions to Korea’s makjang dramas.

His comments came on the heels of similar statements by another GNP lawmaker, Jin Seong-ho, last month.

“I’ve seen other adultery-themed dramas in the past, but none so provocative,” Jin said during the parliamentary audit of government ministries and organizations. “It’s lamentable how dramas like Bapjwo are being aired at 8 p.m. when the family is watching TV together.”

In response to these growing concerns, Lee Jin-kang - chair of the Korea Communications Standards Commission, the country’s television and communications watchdog - recently took aim at makjang dramas, vowing to monitor and, if necessary, punish the producers behind these shows and the broadcasters that air them. 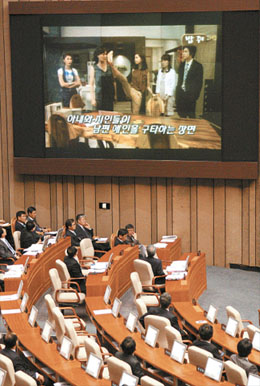 But there are differences of opinion even within the commission, highlighting how tricky the issue is. During one of its recent regular meetings, members of the organization discussed punishing those behind Bapjwo. But they were starkly divided: Four members were in favor of forcing the show’s producers to publish an apology, while the other four voted for giving the producers a warning. The commission couldn’t hammer out a final solution and decided to deliberate and decide a punishment later.

Bapjwo, which wrapped up on Oct. 23 after 106 episodes, was about an estranged married couple. The most controversial scene implied spousal rape.

Many observers, however, believe that the government only has a limited amount of power to control the situation. A big challenge appears to be how policy makers will determine whether or not a drama can be classified as makjang and, then, whether a show has gone too far.

An online dictionary created by Internet users defines makjang dramas as those shows “that contain complex, twisted relationships, unreasonable and extreme situations and provocative scenes.” It adds that they “frequently feature incidents that rarely happen to a person in a lifetime.”

Oh Myeong-hwan, a professor at the Yong-in Songdam College, said in a recent forum on makjang dramas hosted by the Citizen Network for Media Reset that these programs can be described as those where “the characters continue to defiantly show unruly behaviors.”

The forum was the first of its kind hosted by a civic group, indicating public awareness of and concern about the issue.

Yet many shows, even tame ones by most standards, could arguably fit these definitions. And what is perverse and twisted to one person may not be to another depending on individual values and principles.

Another challenge stems from the fact that any action by the Korea Communications Standards Commission must, by law, come after the dramas air - when the damage, if any, has already been done, observers say. Possible punishments range from the light, like cautioning or warning broadcasters, to the heavy, like demoting responsible personnel. But aside from the case of the news program “PD Diary,” where the government cracked down significantly on the show after an episode on mad cow disease that they said purposely misled viewers, officials have done little to discourage questionable TV content.

The drama Wife’s Temptation received a strong warning, but that’s more or less it.

And as much criticism as these shows generate, they often prove to be ratings monsters. Bapjwo, for instance, recorded a 20.5 percent rating, quite a feat for a daily drama. Wife’s Temptation, meanwhile, achieved a record 40.4 percent rating. Anything above a 40 percent rating is said to reach “national drama” status, meaning that it’s loved by a big chunk of the country. 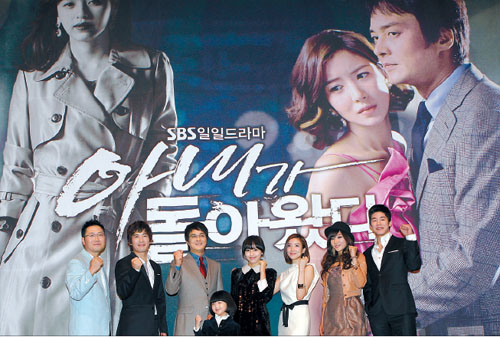 The producers and stars of “Wife is Back” said at a recent press event that the program will present an emotional, convincing story line, unlike its prequels. [JoongAng Ilbo]

In these cases the old maxim “even bad publicity is good publicity” holds true. It therefore takes a strong conviction on the part of broadcasters to say no to the temptation of immediate gains.

Oh Hyeon-chang, the producer of Bapjwo, said he “doubts whether dramas can really be the subject of objective deliberation,” adding that he believes internal gatekeeping is the only viable solution.

Supply and demand at work

Some experts say that producers often rely on adultery-revenge dramas in times of economic stress. The story line helps viewers forget about reality. Also, struggling broadcasters can save money, as these types of dramas rarely need A-list stars.

But producers of these dramas point to different reasons.

“There is a clear difference between the setting being makjang and the process being makjang,” said a member of the creative team involved in SBS’s “wife” trilogy: Wife’s Temptation, “Two Wives” and “Wife is Back.” In other words, it is acceptable if viewers understand and relate to the reasons behind the actions of the characters.

Wife is Back, which began airing earlier this month, revolves around a woman who gets revenge on the husband of her identical twin sister. The sister was forced to leave her husband and their child by her mother-in-law. A member of the creative team behind the series, who declined to be named, said that some of Korea’s classic literature, like the folktale “Janghwa Hongryeon,” also has unreasonable, extreme settings. But as long as the characters’ decisions and actions in the process speak to readers or viewers, she thinks it’s O.K.

Janghwa Hongryeon is about two girls and their conflict with a mean stepmother who abused them. The girls commit suicide and their ghosts take revenge on the stepmother.

The writer of Wife’s Temptation, Kim Soon-ok, echoes this view. Kim, whose latest show “Angel’s Temptation” launched in mid-October, was also quoted by Yonhap as saying that she wanted to create a piece like “Hamlet.”

“In Hamlet, the protagonist finds out that it was his mother and uncle that killed his father,” Kim said in that interview. “But nobody says Hamlet is makjang.” Kim says that’s because people can relate to why the characters do what they do.

Angel’s Temptation has already received its share of criticism. The story revolves around a wife who starts a fire to kill her husband. The husband, however, miraculously survives and literally gets a new body and face through surgery to seek revenge.

Some critics argue that something must be done to regulate makjang dramas. And many are particularly concerned about the possible impact on teenagers.

Psychology experts like Hwang Sang-min of Yonsei University assert that when crimes are committed by characters on TV dramas and they are portrayed as if they are common and usual, it can affect youngsters who have yet to form a strong sense of self-control and morality.

The three people entangled in a love-triangle in Wife’s Temptation, for instance, all commit suicide - a particularly touchy subject here in Korea.

Critics say broadcasters have essentially become less concerned with protecting teenagers, pointing to recent data revealing an increase in violations of state-designated Teenager Protection Time. Korean Broadcasters are not allowed to show programs rated “Suitable for Adults 18 and Older” during this time, which runs from 1 p.m. to 10 p.m.

Professor Oh also argues that Korea’s image abroad and the reputation of its people suffer when these dramas are exported to other countries.

But some industry insiders argue that makjang dramas should be recognized as a new trend, saying they break away from the stereotype of the oft-melodramatic daily dramas.

For that reason, respected drama writers like Lee Gi-won, who was behind the hit medical show “Great White Tower,” have become avid fans.

“If you look at America’s ‘Desperate Housewives,’ it’s not just about sex, scandals and crimes, but also how these middle-aged women find solutions to crisis, love and happiness,” says TV critic Lee Yun-jeong.

“As long as Korean dramas come up with more relatable, mature themes for conflict and crisis, other than the typical cheating husbands and mean mother-in-laws, I think I will look forward to makjang dramas.”