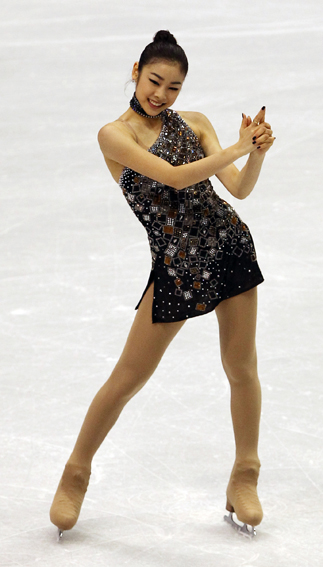 Kim Yu-na is on track to defend her Skate America title and in the process earn her seventh consecutive ISU Grand Prix of Figure Skating event at the Skate America in Lake Placid, New York.

Skating in the ladies’ short program yesterday at the Herb Brooks Arena (1980 Rink), Kim set a new record in the short program with a score of 76.28.

The 19-year-old broke her own record of 76.12 in the short program which she had set at the World Championships in Los Angeles, California in March.

“I tried not to concern myself with the scoring at this event. I think that actually led to a higher score,” Kim said. “I always try to put on a flawless performance but it sometimes leads to poorer results. I did not want to pressure myself by worrying too much about the scores.”

The 19-year-old started with a triple lutz and triple toe loop combination followed by a triple flip and double axel, drawing a loud reaction from the crowd.

Although Kim had trouble landing her triple lutz jump in the practice session the day before, she was able to avoid any mistakes in her routine and finished her program with a spin combination.

Kim seemed happy with her performance as she clasped her hands and smiled with her eyes closed as the 8,000 or so in attendance gave her a standing ovation.

“I was not aware I had set a new record in the short program. I was shocked when I saw the final scoring,” explained Kim.

“I was a little nervous heading into the program, having earned a high score at the season opener [in Paris]. I actually began to relax once the music started playing. I thought the spin combination could have been better but I was surprised when I saw the final scoring,” she said.

Having put on another commanding performance in the short program event of the competition, Kim is set to compete in the free skate portion of Skate America early today starting at 4 a.m. (KST).

Kim holds a significant lead over the field of 12 female skaters with American Rachael Flatt in second place with a score of 58.80, Julia Sebestyen of Hungary finished in third with 58.54 and Fumie Suguri of Japan fourth with 56.04.

With the win, Kim will secure a spot in the Grand Prix Final in Tokyo, Japan from Dec. 3 to 6. Six of the top skaters from this season will compete in the final and it will be the final ISU event prior to the 2010 Winter Olympics in Vancouver in February.