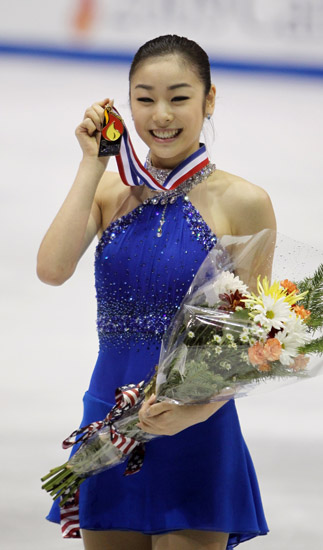 Kim is all smiles after winning the Skate America event in Lake Placid, New York on Nov. 16.

It was not the prettiest of her wins but Kim Yu-na earned her seventh consecutive ISU Grand Prix of Figure Skating events at the Skate America in Lake Placid, New York earlier today. Despite receiving deductions on three of her jumps, Kim defended her Skate America title with a score of 111.70 in the free skating portion and 187.98 overall. American Rachel Flatt, who was tops in the free skating portion with a score of 116.11, finished second with a score of 174.91 and Julia Sebestyen of Hungary was third with 159.03.

Skating in the free skating portion of the competition to George Gershwin’s Piano Concerto in F at the Herb Brooks Arena (1980 Rink), Kim looked shaky from the start of her routine. She started the program on a bad note by receiving deduction on her triple lutz and triple toe loop combination. But Kim’s low point on the day was when she fell during a triple flip jump.
The 19-year-old was coming off another record-setting performance in the short program in which she earned a score of 76.28 yesterday, replacing her own record of 76.12 she had scored at the 2009 World Championships in Los Angeles, California in March.

“Compared to the short program, I was lacking confidence and wasn’t in good physical shape,” stated Kim. “I learned a lot from the event and it was a good experience for me.”

Kim had been on an impressive run this year. Since winning the 2009 World Championships with a record setting score of 207.71, Kim started the ISU season by setting another record of 210.3 at the Trophee Bompard in Paris last month. With her latest win in Lake Placid, Kim has earned a spot in the Grand Prix Final in Tokyo next month.