Not at her best, but Kim still wins big

Not at her best, but Kim still wins big 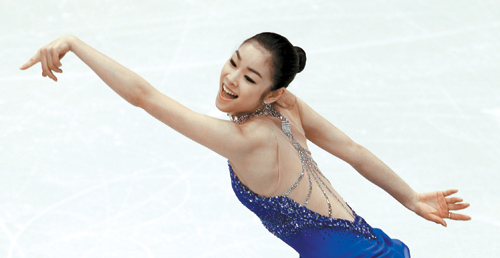 It was not the prettiest of wins but Kim Yu-na earned her seventh consecutive ISU Grand Prix of Figure Skating events at Skate America in Lake Placid, New York early yesterday.

Competing in the free skating portion of the competition to George Gershwin’s Piano Concerto in F at the Herb Brooks Arena (1980 Rink), Kim looked shaky. In contrast to her past performances this year, she started the program on a bad note, losing points for her triple lutz and triple toe loop combination. While she failed to execute three of her jumps in a crisp enough manner, the low point was when she fell during a triple flip jump. The free skating score was Kim’s second-lowest total since turning pro in the 2006-07 season. At the Skate Canada event that year, Kim posted a score of 105.80. Despite several mistakes, Kim drew a standing ovation at the end of her routine.

Free of injuries, Kim has been dominant this year, blowing away competition with commanding victories at the 2009 World Championships in Los Angeles, California in March and the season opener Trophee Bompard in Paris, France last month.

The 19-year-old continued her record-setting pace by posting a new record in the short program with a score of 76.28 yesterday. It was 0.16 of a point better than her previous best of 76.12 at the world championships in March.

“I was shaky on my first jump and although I tried hard to finish strong, I had trouble doing so. Compared to the short program, I lacked confidence and wasn’t in good physical shape,” stated Kim. “I learned a lot from the event and it was a good experience for me.”

Kim had been on an impressive run this year. Since winning the 2009 World Championships with a record-setting score of 207.71, Kim started the ISU season by setting another record of 210.3 at the Trophee Bompard last month.

Although Kim stated prior to the start of the U.S. competition that she would try to target another score in the 200 range, she also said she would try not to put too much pressure on herself. However, Kim explained at the end of the event, pressure was a factor in her sub-par performance.

“The high score in the season opening event [Trophee Bompard] had me worried about whether I would be able to maintain my pace,” Kim said. “In addition, I felt the pressure to live up to the high expectations of the fans after a record setting short program yesterday.”

Dressed in black, Kim performed in the gala show after the free skating yesterday morning. Skating to “Don’t Stop The Music” by Rihanna, Kim executed all her jumps without a hitch in the routine and drew loud cheers from the crowd.

Kim will take a day off before she begins training for the event, which she lost to Mao Asada of Japan last season.