Are you ready to rock? Guns N’ Roses to hit Seoul

Are you ready to rock? Guns N’ Roses to hit Seoul 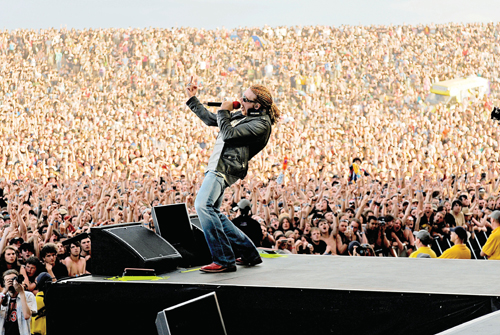 Guns N’ Roses, led by vocalist Axl Rose, will be coming to Korea next month. Provided by Access Entertainment

Music fans in Korea often lament that only over-the-hill singers and old school musical acts perform in the country.

That complaint, however, is becoming less and less convincing with A-list acts such as Mariah Carey, Beyonce, the Pussycat Dolls, Lady Gaga and Maroon 5 rolling into town in recent months.

While some music fans might categorize the group as yet another ho-hum act way past its prime - the band has been around for 24 years, after all - the concert organizer sees it in a different light.

Access Entertainment, which is behind the show, said in a press release that of all the foreign rock bands it has helped bring to town in the past, none have enjoyed as much attention as Guns N’ Roses. Officials believe that the concert will prove to be a satisfying experience for both the older generation that idolized the group in the 1990s as well as the younger generation that has discovered GNR relatively recently.

“Tickets sales have already broken records set by other successful concerts we organized earlier in the year, like the Lady Gaga show this August,” Yvette Moon, a manager at Access Entertainment, said on Monday.

The American hard rock band was formed in California in 1985. The group has six studio releases under its belt and album sales of 100 million. Their albums “Appetite for Destruction,” “Use Your Illusion I” and “Use Your Illusion II” topped major U.S. charts.

Last year, the band released its long-awaited sixth album, “Chinese Democracy,” after working on it for 17 years. In a recent interview, Axl Rose, the leader of the group, said that he is aware that the media and fans had “high hopes” for the album and acknowledged that there were naysayers who doubted the band’s ability to produce. But he said band members were “just trying to do [their] best for the fans and [themselves]” with the newest release.

The concert organizer promises that audiences will hear more than just tracks from the latest album. The band, Access Entertainment said, will play other hit songs in what is the group’s first - and possibly last - concert in Korea.