Artist nails light into the dark

Artist nails light into the dark

There are many things people can hang with nails but not many know they use them to hang light, an art critic said in discussing the works of artist Yoo Bong-sang.

At a distance, Yoo’s works may not seem like anything out of the ordinary but upon closer inspection one can see that they are not paintings so much as they are collages created with hundreds of nails.

The works are being shown in an exhibition titled “Nailed Nostalgia” at Gallery Hyundai’s Gangnam Space in southern Seoul.

The subjects of these works, 20 in total, are the forests, seas and buildings in Korea and in France, where he used to live. 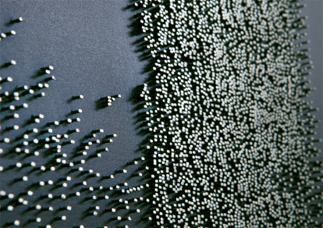 A close-up shot of one of the pieces in the exhibition “Nailed Nostalgia” by artist Yoo Bong-sang.

Nails are unusual materials for an artist to work with. They are hard and cold. But the works in the exhibition are surprisingly delicate and soft.

To create the works, Yoo said he experimented with different techniques and one day started attaching metals including nails onto dark backgrounds. He was moved by the effect and continued his work, primarily with nails.

“Metals and dark backgrounds go very well together,” Yoo said. “I like working with nails.”

Yoo first photographs a scene and then transfers the print onto a canvas that he affixes to a large panel of wood. He drives the nails into the canvas and sprays the entire piece with paint. Then, he grinds the nails down just to the point where all of the paint is scraped off.

Light plays an important role in Yoo’s works because what the viewer actually sees is the light reflected from the nails. The reflections of light are actually what give pieces their shape. A dense concentration of nails reveals the portion of the original scene that was brightened by sunlight, the places with fewer nails received less light.

“He literally ‘nails’ the .?.?. instant rippling of light that is discovered in mother nature onto his work,” art critic Lee Sun-young wrote in the exhibition catalogue. “In that way, he is similar to the Impressionists, the ‘hunters of light.’”

What is amazing about Yoo’s work is that the scenes change depending upon the viewer’s perspective. The effect is like looking at a lenticular print.

However, the works need to be viewed at a distance because the nails act like pixels and cannot illustrate detail. Those standing close to the pieces may not recognize what the paintings are meant to describe.

Yoo’s works also represent both concreteness and abstractness. Although most of the pieces portray nature, the monotone colors of the panels that form the background for the scenes, especially the ones depicting the horizon, evoke a strong sense of abstraction.