The girl in yellow glides into town

The girl in yellow glides into town 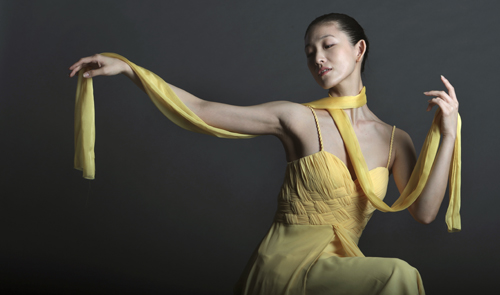 “Whenever I see the color yellow, my heart beats fast,” the 31-year-old said.

What gave Kim this yellow fetish? The musical “Contact.” Conceived by American theatre director, choreographer and performer Susan Stroman and American librettist John Weidman in 1999, the musical will be presented in Korea in January for the first time. Kim will play the main character, the Girl in the Yellow Dress.

When asked if she had practiced singing, Kim shook her head. “If I had to sing, I wouldn’t have dared to do this,” she said. “I’ll just be dancing, dancing hard.”

A musical with no singing?!

Contact is a strange musical. The performers don’t sing. They don’t have many lines, either. Instead, everything is expressed through movement and dance to pre-recorded music. So can it still be called a musical?

Contact has already gone through a controversy of sorts over this question. After it was staged at the Vivian Beaumont Theatre at the Lincoln Center for the Performing Arts in New York in 2000, it sparked a heated debate on the American theater circuit about what makes a musical a musical.

Nonetheless, Contact has succeeded in entertaining audiences. The show has had more than 1,000 performances in the U.S. alone. It has also enjoyed widespread critical acclaim, winning several awards including the 2000 Tony Award for Best Musical. And controversy aside, the show has given birth to a new genre known as the dance musical.

So what facet of this unprecedented musical most appealed to a ballerina like Kim?

“I saw the poster at the entrance [of the Korea National Ballet Company]. I was immediately drawn to the main female character in the yellow dress,” Kim explained.

Contact consists of three dance pieces. The story is comical, dramatic and highly engaging. Kim appears in the third scene, a contemporary number with acrobatic swing dancing, where she will play a beautiful young woman in a yellow dress that is the fantasy of a young man named Michael Wiley.

Considering the conservative nature of the ballet world in Korea, one would think that it would have taken quite some nerve for Kim to have taken the role in Contact. But Kim’s response was quite the opposite.

“Ballet used to be a popular art in the past,” she said. “So I think it’s pretty meaningless to delineate what pure art is and what popular art is, not to mention which one is superior. I personally think a young celebrity can be an artist who’s more philosophical and fierce than a lot of other ‘artists’ are.”

Kim says she has been tirelessly inquisitive since she was a little girl. That quality, that relentless pursuit of new experiences, she says, is what makes her who she is as a dancer.

After all, Kim did make headlines posing semi-nude for Vogue in 2007. She also attracted media attention for performing in the experimental ballet “Chunhyang’s Soul Mate,” a modern ballet based on Chunhyang, the well-known Korean folk tale of the two young lovers Chunhyang and Mongryoung.

“I don’t want to be trapped in just one genre. But there is a basic condition for all my challenges: Dance must be at the center of them.”