Remembrance of things past

Remembrance of things past 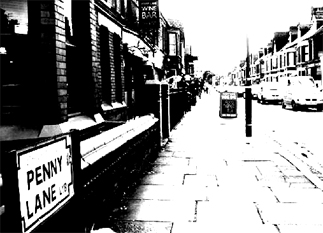 Liverpool is proud of its association with the Beatles - all four band members were born and bred Liverpudlians. Tourists keen to pay homage to the Fab Four arrive at the Liverpool John Lennon Airport and will inevitably visit Penny Lane, a street in the city that inspired the song of the same title, a nostalgic glance back at life in the neighborhood: “Penny Lane is in my ears and in my eyes.”

Penny Lane is named after James Penny, a notorious 18th-century slave trader. At that time, Liverpool was the busiest port in Europe from which a triangular trade operated.

Ships that started in Liverpool sailed to the west coast of Africa to trade European goods for slaves. They then transported the human cargo to the Americas, where they were traded for cash crops - sugar, tobacco and coffee - and then sailed back over the Atlantic to Europe.

Around 10 million African slaves were traded in this way, though many more died on the voyage across the ocean, living in squalid, cramped conditions until they finally reached shore.

Liverpool has not forgotten its shameful past. In 1999, the city council officially denounced its past, apologizing for its long association with the slave trade.

In 2007, the city opened the International Slavery Museum, which exposes the grim reality of its past. In the museum, visitors can experience through virtual reality the horrendous conditions that the African men, women and children had to suffer.

The activity was devised to ensure that future generations will never take for granted the city that they live in and appreciate that much of its prosperity was built on human misery.

It’s interesting to compare this to Hiroshima Peace Memorial Park in Japan, our neighbor. There are a handful of exhibits detailing barbaric acts committed by the Imperial Japanese army during World War II, but the display mainly focuses on the miseries caused by the atom bombs dropped by the United States in 1945.

The museum, like the one in Liverpool, also exhibits cutting-edge technology to remind younger people of the past. In one of the exhibition rooms, visitors, many of whom are students, can vividly experience the suffering of the people who were killed when the bombs dropped on Hiroshima and Nagasaki.

Interestingly, the Emperor of Japan, Akihito, who recently commemorated the 20th anniversary of his enthronement, has said he is worried that Japan might forget its history.

I believe that the shameful past of Japan should be part of this history that the emperor is worried his countrymen might forget. If so, shouldn’t the Hiroshima Peace Memorial Park be changed first to include not just details of the nuclear attacks but also the wrongdoings Japan committed leading up to and during World War II?

The Japanese are eager to meet U.S. President Barack Obama, and he has expressed his desire to see the Japanese cities that the U.S. dropped atomic bombs on.

When Obama eventually visits Hiroshima or Nagasaki, what kind of historical view will the Japanese show him? I am curious to know how the Japanese will greet him.