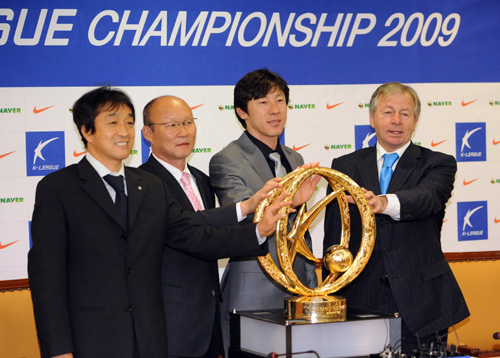 The road to the final rounds of the K-League Championships 2009 starts this weekend with the third to sixth placed teams squaring off in a single-game elimination format. With their eyes on the prize, the initial goal of the four teams is to reach the semifinals and earn a ticket to next season’s AFC Champions League.

FC Seoul will face off against the Chunnam Dragons on Saturday at Seoul World Cup Stadium starting at 5 p.m. Seongnam Ilhwa will face Incheon United at Seongnam Stadium on Sunday starting at 2:30 p.m.

Although the four teams will look to win the K-League title, they have another goal in mind: a spot in next year’s AFC Champions League tourney. Jeonbuk and Pohang, who finished first and second, respectively, in the regular season and FA Cup winners Suwon Bluewings have already secured spots in next year’s Champions League. The fourth and final spot will go to the team that advances to the semifinals.

At the moment, FC Seoul is the favorite of the four teams to advance to the semifinals. Having narrowly been eliminated from the AFC Champions League quarterfinals by Qatari club Umm Salal, FC Seoul were in solid position to finish second in the league standings until the late stages of the K-League regular season but was overtaken by eventual Champions League winners Pohang. FC Seoul will be without their star forward Dejan Damjanovic but still boasts a powerful lineup led by national team members Ki Sung-yeung and Kim Chi-woo.

“We have been preparing for the playoffs by holding a training camp in Gangneung [in Gangwon] since the end of the regular season. We do not have any injuries,” said Lee Young-jin, an FC Seoul assistant coach, at a K-League Championships media day event at the Korea Football Association building in central Seoul yesterday morning. “We will focus on attack-minded football and with Ki Sung-yeung having returned earlier this week from a national team international friendly match [against Denmark], we expect a big game from Ki.”

The Chunnam Dragons are the lowest ranking team in the postseason, and they had their share of drama earlier this season involving midfielder Lee Chun-soo, who opted to leave the team for the Saudi club Al-Nassr.

Although the Dragons lost big by a score of 6-1 to FC Seoul in March, they did manage a tie in the only other game between the two clubs during the regular season. The Dragons will count on their forward Adriano Chuva, who netted 13 goals in the regular season, to lead their attack.

“We achieved our initial goal of advancing to the playoffs. Out next goal is to win the title and FC Seoul is merely another team we must face to realize our goal,” said Dragons manager Park Hang-seo.

In the other first round matchup, Seongnam Ilhwa will play Incheon United. Seongnam Ilhwa lost a close game to the Samsung Bluewings in the FA Cup finals and will be looking to redeem their shortcomings and earn a spot in the Champions League in the process. “Since losing a close match in the FA Cup finals, I gave the players four days of rest. We have been training since last Thursday. Our regular season record at two ties and a loss is not great but we do not lose twice to a team and we will net solid results,” stated Seongnam Ilhwa manager Shin Tae-yong.

Incheon United, who are making their first playoff appearance in four years, are eager to impress their fans. “What plays to our advantage is that we have made the playoffs for the first time since 2005 season. Our players have the strong desire to win and we will outpace our opponents to a victory,” said Incheon United manager Ilija Petkovic.