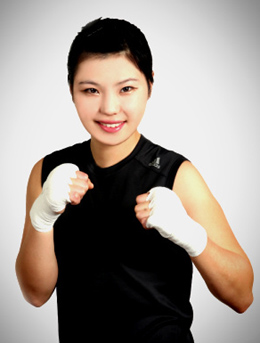 
Boxers from humble backgrounds are not rare. However, a North Korean defector who realizes a dream of winning a world title does not pop up too often.

Choi Hyun-mi, the World Boxing Association’s featherweight world champion, is on track to make a name for herself in the sport of boxing thanks to the support of a university professor.

Choi is set to fight in 10-round title bout, her second title defense, on Saturday against Tsubasa Tenku of Japan at the indoor stadium of Sungkyunkwan University, Suwon Campus. A world title defense is important for any fighter but the locale of the fight will be more significant considering Choi is set to enroll in the school’s School of Sport Science come March.

The eight-bout event will kickoff at 1:15 p.m. Saturday with the main event featuring Choi against Tenku, who boasts a WBA ranking of fourth and 13 wins and three losses with six wins by way of knockouts.

“Tenku is an experienced and quick fighter but she shouldn’t pose much of a threat for my fighter. We will try to have Choi press Tenku in the early rounds with the goal of a knockout in the mid-rounds,” explained Lee Yong-hoon, Choi’s trainer.

Born in Pyongyang, North Korea, Choi was a promising boxer for the Kim Chul Joo Educational University in Pyongyang before escaping to South Korea in July 2004. She started training again while a student at Yeomgwang High School. She steamrolled through competition, posting a record of 16 wins and one loss, with 16 knockouts. Choi entered the professional ranks with a splash. She won the WBA featherweight world title in just her second professional fight. She was young, showed plenty of promise and packed a lot of power in her punch. She also had a bit of luck on her side at the time as the title was vacant and Choi, who was ranked fifth at the time, got a shot against a Xu Chunnyan of China, who was ranked fourth at the time.

As a North Korean, she garnered plenty of coverage in the press and earned the moniker of “Korea’s million dollar baby,” in reference to the film about a female boxer from a humble background. But it didn’t necessarily amount to immediate success. Boxing no longer has the mass following it did in years past and women’s boxing on average attracts even less interest. This mean little to no endorsement deals and low prize money in the 10 million won ($8,660) range, even for a title holder like Choi.

“Even though it is an Olympic sport and was once one of the most popular sports in Korea, boxing has lagged in popularity for years,” said Yoon Seung-ho, professor of sport science of Sungkyunkwan University. “As the economy has improved and living standards have gone up, people have shifted their interest to sports like golf and figure skating.”

While world title holders are required to defend their title within a specific period of time, Choi did not have an easy time gathering enough financial support to host the fight. Help came from an unlikely source and provided Choi with realizing both her dream of financial support and a post-secondary education. Yoon came across a documentary on the boxer last spring and decided to step in and help.

“I had never been to a boxing match prior to getting involved in helping Choi,” said Yoon, who is helping with the promotional side of the title match. “I was moved by her story and wanted to help. Choi [Hyun-mi] is a world-class talent and wanted to be known but wasn’t in a good situation. I don’t wish to get into the details but she wasn’t in a great financial situation at the time and wasn’t in an environment she could flourish in as a fighter.”

Yoon, who plans on helping Choi fight on American soil, has also helped Choi realize her dream of furthering her studies. Having passed the entrance exam tests, Choi was admitted into the Sungkyunkwan University School of Sport Science earlier this year. While juggling a life as a world champ and a university student will not be easy, Yoon has no doubt it will work out fine for Choi.

“She will be staying in the school dormitory and will train in excellent training facilities. It’s a great environment for an athlete like Choi who wants to pursue a university degree,” Yoon said.