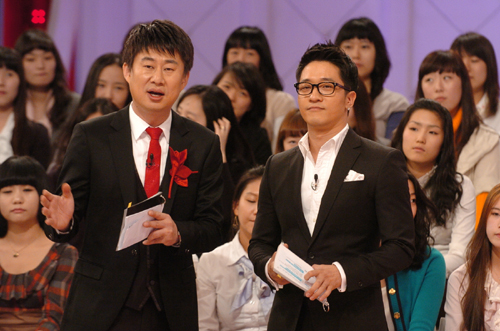 With the increasing number of regular people appearing on TV programs, the shows have become the subject of controversy, as seen in the “loser” controversy from the popular KBS-2 TV show “Chatting Beauties.” Provided by KBS

A line from the movie “To Die For” reads like this: “Before I appear on TV, I am nothing. If no one cares about me, I am useless.”

It seems to express well modern people’s infatuation with the media. On the opposite end of such exhibitionism is voyeurism, which involves people’s desire to peek into others’ private lives.

A trend these days is for ordinary folk with no previous exposure in the media to appear on television.

Shows featuring these average Janes and Joes work well for all parties: viewers feel that the characters are regular people just like them, and producers find it economical because they don’t need to hire highly paid actors.

Despite the positive aspects of diversifying television programming and drawing more viewer participation, however, hiring members of the general public for TV shows also has its fair share of problems. A good example is the recent “loser” controversy incited by the comments made by a female university student who appeared on the popular KBS-2 program “Chatting Beauties.” In a broadcast last Monday, she said that men under 180 centimeters (5-foot-11) are “losers” in a society where external appearance is considered a sort of competition.

One of the advantages of employing members of the public on a TV program is that it can add a dash of realism. Viewers tend to feel that a show performed by non-professionals is more like reality than one performed by professional actors. That is why the plot of shows like the cable TV program “I’m Your Pet,” in which ordinary people live together, produces a more enthusiastic viewer response than does a show employing professional actors such as the celebrity reality show “We Got Married.”

However, it is impossible to broadcast a person’s real life around the clock or show his/her true feelings within the limitations of a single show. That is why producers figure out each individual’s inclinations and behavior patterns through numerous interviews prior to doing the casting for a TV program. A script is written based on the information collected, and when the person accepts the script, the show is run.

The problem is that this kind of “selected reality” is likely to conform to the wishes of the show’s producers. That was exactly what happened regarding the female university student’s controversial remarks on Chatting Beauties.

According to details revealed later, the student said in a previous interview that she does not like short men and the writer induced her to use a stronger word, “loser,” during the show. She read the script word for word - causing a sensation. Later, the student asserted that she had just read the script as written, which drew the objections of the show’s producers, who argued that there was no pressure on her.

Sometimes it is an excruciatingly difficult job for producers to find ordinary people who are adequate actors. That is especially true with coarse content, which includes money and sex. Some actors are even “reused” because a number of producers share lists of available actors and cast them on different shows.

For example, a man who appeared as a 39-year-old who had never been kissed on the tvN show “Martian Virus” - which features regular folks with unique characteristics - later appeared on another show as a UFO hunter.

“If a person has had prior experience appearing on TV programs, they are less resistant to editing and therefore, more agreeable for us to work with,” said a script writer for a TV program who declined to be named.

Martian Virus recently featured a young man said to be worth 200 billion won ($173.2 million), but the show immediately drew criticism from viewers arguing that the way the amount had been calculated was unconvincing. One person on the Mnet show “Seo In-young’s Brand New Friend” was revealed to have gone too far in lying about her grandmother’s death because she was worried about getting eliminated.

“People are unknowingly taught about the advantages of fame from a young age in Korea, but they are not told about the dangers of popularity,” the culture critic Jeong Yeo-wool noted.