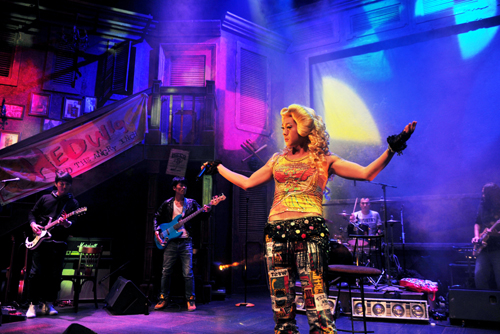 Popular rock singer Yoon Do-hyun plays the title role in the fifth version of the local production of “Hedwig and the Angry Inch.” Provided by the organizer

The local production of “Hedwig and the Angry Inch” - which has been called the most stylish rock musical of the century - is back with a notable cast that includes popular rock musician Yoon Do-hyun in the title role.

Since its inception in 2005, the Korean production of the famed rock musical has been a bona fide success. In 977 performances from 2005 to 2008, it has drawn audiences of more than 300,000. And hundreds of local “Hed heads” say they have seen the show more than 10 times.

The show has also been good for local actors, many of whom, including Oh Man-seok, Cho Seung-woo and Um Ki-joon, have found renewed fame and fans after playing the lead.

“I’ve never seen the musical, although I have seen the film adaptation of it three times. Though I like the music and the message in it, it’s not easy to perform,” Yoon, the new Hedwig, said after a preview for the press in Samseong-dong on Friday. 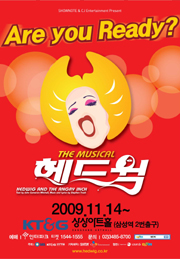 “It’s been 10 years since I performed in a musical,” he said, referring to his performance in the musical “Hard Rock Cafe.” But he says he has no regrets and is now doing his best to inhabit the character of Hedwig.

The musical tells the story of Hansel, a man born in East Berlin who falls in love with a U.S. soldier. In order to marry the soldier and flee to the West, Hansel undergoes a sex-change operation and is reborn as Hedwig. Unfortunately, the operation gets botched, leaving Hedwig with that “angry inch.”

When asked how he felt about playing a transgender person, Yoon, who is well known for his masculine charisma, said that although that was an aspect of his character that was difficult for him to relate to, he did learn “how dreadful it is to feel prejudice.”

“Through this show, I hope to deliver the message that we are all equal and that we can live together in peace as we respect each other’s differences,” he said.

He also commented on the historical significance of the show’s setting.

“The fact that Hedwig is set in East Germany is also meaningful as we celebrated the 20th anniversary of the collapse of the Berlin Wall just a few days ago,” Yoon said.

Music director Lee Jun said that the music for this version of the show, the fifth such version for a Korean cast, will be closer than previous versions to the original, which was written by John Cameron Mitchell with music and lyrics by Stephen Trask.