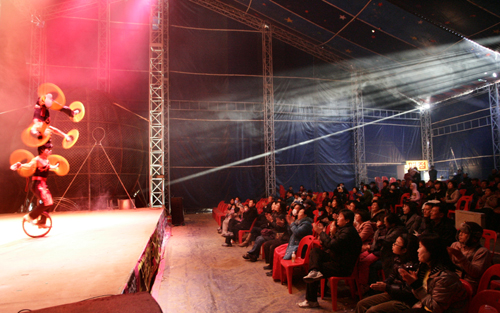 Several dozen people braved the cold weather last Saturday in Cheongnyangni, eastern Seoul, to watch what was initially billed as the final performance of the Dongchun Circus, which is suffering financial difficulties. The organizer of the 84-year-old event decided to continue shows at least through the end of the year as he explores alternatives. By Oh Sang-min

Inside a blue-and-white marquee ringed with antiquated heaters, several dozen parents and children sit in red plastic chairs, breathing warm air into their cupped hands while gazing up at a woman soaring on a trapeze.

It’s an unseasonably cold night, yet these families decided to brave the bone-chilling weather to see what is being billed as the final performance of the historic Dongchun Circus.

“I heard that this was the last show, so I came here with my family to watch it before it closes,” says 40-year-old Kim Dong-su, his wife and two children in tow. “It’s good to see it again, as I hadn’t been to the circus since I was a little kid.”

This was the scene under the big top in Cheongnyangni, eastern Seoul last Saturday, when performers were scheduled to take their final bows as the curtain closed on the only remaining traditional circus in the country - which was to become the latest casualty of the economic downturn.

But like a tightrope walker who almost slips before regaining balance, the struggling circus decided at the last minute to push forward and hold performances at least through the end of the year despite the fact that it’s losing money. It now, however, must perform yet another eye-popping feat: Figure out a way to survive in a time when these types of family-oriented performances often take a backseat to video games, movies and a host of other entertainment options. 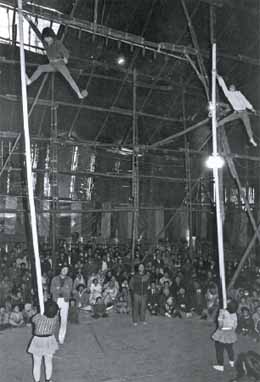 The Dongchun Circus, which was the first circus company in Korea and is now the only one left standing, boasts 84 years of history. It hit its heyday in the 1960s and early 1970s. [JoongAng Ilbo]

For the Korean cultural scene, there’s a lot at stake.

“If the Dongchun Circus closes down, it means that not just one circus troupe, but the entire art form itself disappears in Korea,” Park Se-hwan, 65, who has led the Dongchun Circus for the past 32 years, said in an interview with the JoongAng Daily.

The Dongchun Circus has a special place in the hearts of older Koreans, many of whom attended shows when they were children and later brought their own kids as well.

The group was founded in 1925 by Park Dong-soo - a Korean who previously was part of a Japanese circus - and another 30 or so local performers. The troupe took its name after Park, whose pen name was Dongchun, and became the first circus company in Korea.

Since its initial public performance in 1927, the circus has long served as a major entertainment source for the Korean public, reaching its heyday in the 1960s and early ’70s. It even served as the launching pad for many old-time Korean celebrities, including musician Lee Bong-jo, actor Heo Jang-kang and comedians Seo Young-chun, Lee Joo-il and Bae Sam-ryong, to name a few. 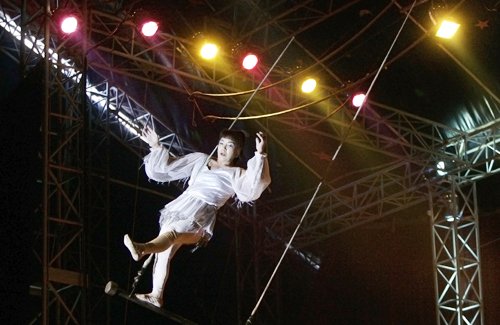 Kim Young-hee, who has performed on the trapeze with the Dongchun Circus for 40 years, said the collapse of the event would hurt her livelihood and bring an end to the art form in Korea. By Oh Sang-min

“Performers at Dongchun enjoyed as much popularity as today’s TV stars do,” said current Dongchun organizer Park, who also was once a circus performer himself.

But the circus industry in Korea began to slide as the 1970s progressed, coinciding with the rise of new entertainment sources. As a result, many local circus companies disappeared, and there were just five left in the 1980s.

“When many circus and musical troupes were affected by the introduction of new entertainment sources like TV and cinema in the 1980s, Dongchun remained stable mainly because of a solid fan base,” Park said. 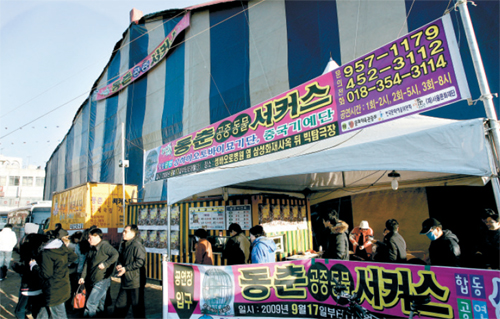 The Dongchun Circus was initially going to close last Saturday due to financial difficulties but decided to press forward and continue at least through the end of the year while it looks for alternatives. By Oh Sang-min

In recent years, the circus has succeeded in part by offering entertainment for the broadest spectrum possible, keeping its prices at just 8,000 won ($6.94).

But the situation has shifted dramatically in just the past year.

Like many other performances and shows, the Dongchun Circus took a hit when the global economy tanked last fall and consumers reined in spending. But the situation only got worse from there, with attendance plunging to - and staying at - new lows.

The Dongchun Circus used to draw an average of 400 to 500 spectators daily during the week and a full house of 900 attendees on weekends, Park said. Now, it’s drawing an average of just 20 to 30 visitors daily.

“When the economic downturn hit last year, we became one of the biggest victims, as we are performers who live hand-to-mouth through daily performances,” Park said.

Dongchun performs three times each day at its current base in Cheongnyangni, meaning it has to fill a fair amount of seats on a continuous basis. It also organizes tours around Korea from time to time, particularly when it is invited to regional events and festivals.

It was difficult enough to attract sizable crowds during the throes of the economic downturn. But the spread of the A(H1N1) flu virus has made it an even tougher challenge.

“Our situation became even worse with the spread of the new flu, which forced the cancellation of many festivals around the country,” Park said. “As a result, our revenue started coming in at levels way below our expenses, as we depend on daily earnings from our performances.

“The situation deteriorated to the point where I had to borrow money to pay our members, and I thought, ‘We can’t go on any more.’”

There are other forces at work as well.

A number of long-time Korean performers left as the financial crisis set in, and Park brought in workers from China to take their place. The number of local performers has dwindled from 40 two years ago to just 10 now, which some say has affected the quality of the show.

“A number of my colleagues left because they failed to make ends meet while they had their family to support,” said Kim Young-hee, 47, a trapeze artist who has been with the Dongchun Circus since she was 7. “It’s not that we want wealth and glory in some other field. The problem is that we are doomed to a life where we just scrape by if we continue with this job.”

As the circus now looks to find ways to stay afloat, a handful of industry observers think an overhaul is needed.

Some say the event should take cues from Cirque du Soleil, which started out as a group of struggling street performers facing economic hardship in the 1980s and has grown into a world famous entertainment company that attracts legions of fans.

Cirque du Soleil turned the traditional circus performance on its head, offering audiences a uniquely modern touch and a hefty dose of flair. The Quebec, Canada-based company has attracted 100 million spectators in more than 200 cities around the world, posting annual sales of 1 trillion won ($866.8 million).

But Park points out that Cirque du Soleil initially had significant help from the Canadian government, something the Dongchun Circus hasn’t seen much of here.

Park thinks government funding could indeed breathe new life into the circus, but officials have been reluctant in the past.

Park said government interest has been “inconsistent” and that several previous efforts to work together failed.

“There was in fact a project on the table to establish a permanent theater for the Dongchun Circus in Bucheon, Gyeonggi three years ago. But the plan was later revoked with a change of government leaders,” he said.

The government, however, could be ready to assist after the latest turmoil. Last week, Park said, a group of Culture Ministry officials came to a performance and said they will mull over plans to support the circus in financial or other ways.

The ministry, however, said it is a “complicated issue” and stressed that nothing has been decided yet.

“Many people are sorry for Dongchun’s plight, but lending government support is not something that can be decided based on emotions,” said an official with the traditional arts division of the ministry. “There are people who say Dongchun should be preserved, but others say that the matter should be seen objectively and that market principles have to be considered as well because assisting it involves using taxpayer money.

For now, the show will go on.

Park plans to continue performances through the end of the year regardless of whether or not the government or other parties decide to help. He likely will have to take out loans to keep it going, but he refuses to give up on it just yet.

“I will be further in debt, but I can’t just let it go,” Park said. “The circus is a unique entertainment offering that can be enjoyed by virtually all people in the country regardless of age, gender or income level, which is another reason that it should be kept alive.”

While attendance has slowed to a trickle, the circus still has a fair number of ardent supporters.

After the news of the Dongchun Circus’s impending doom reached the media in late October, some die-hard supporters launched a petition-signing campaign on Daum’s Agora Internet forum.

Their initial target was 500 signatures, but they had double that number as of last weekend.

“We cannot stand by and let the Dongchun Circus fall like this,” one supporter wrote on the forum, using the ID myo.

Another poster, Shin Dae-sik, wrote that the circus “is the only type of entertainment that people of all ages can enjoy and watch together today. We must save it.”

As for the remaining long-time performers, they are desperately hoping for a savior. Their very livelihoods, after all, depend on it.

“Seeing a full house down there when I went up on the trapeze and seeing all those eyes fixed on me - that is the moment when I felt the most nervous, yet the most excited at the same time,” said Kim, the trapeze artist. “To do what I have been doing without worrying about other things and seeing a pleased audience, that’s all I want.”