Much to praise in Korea’s loss to strong Serbian team

Much to praise in Korea’s loss to strong Serbian team 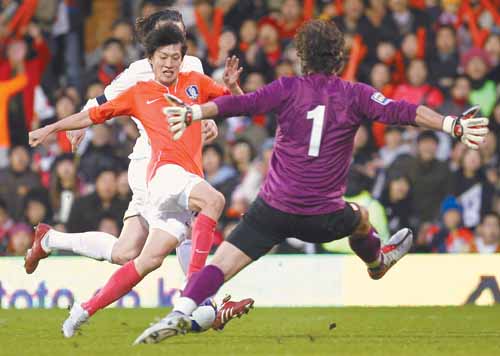 Playing in their final match of the year, Huh Jung-moo and his men lost the friendly match against Serbia, 1-0 but showed plenty of pace and good teamwork throughout the match.

Heading into yesterday’s game, Korea was one win or tie away from tying the Asian unbeaten streak of 28 set by the 1978-79 Korean squad. However, Serbia handed Korea its first loss in nearly two years, or 22 months, to be exact. Despite the loss, national team manager Huh seemed positive about his team’s performance against a squad that boasts a FIFA world ranking of 20th.

“I did not pay much attention to the record. Now that it’s over, I actually feel relieved,” stated Huh in a post-game interview with the press. “We kept it competitive against a European team for an entire game. It’s important that we earned the confidence to face any team at the World Cup.”

Despite the game starting at 2:30 p.m. (London time), a sizeable crowd of 6,500 showed up for the match. Huh had elected to go with Lee Dong-gook and Lee Keun-ho as his two forwards in the friendly match against Denmark earlier in the week but went with Seol Ki-hyeon of Fulham as his lone forward yesterday. Huh also decided to shift team captain Park Ji-sung to an attack midfielder position to support lone forward Seol. Yeom Ki-hun and Lee Chung-yong flanked the wing positions while Kim Nam-il and Cho Won-hee provided stability with their defensive play. Although Park kept himself busy, he did not provide the type of accurate passing the coaching staff had been looking for.

Serbia scored seven minutes into the match and with the first half concluding 1-0, Huh decided to substitute Yeom out of the game for forward Lee Keun-ho. As Lee partnered up with Seol, Park was seen contributing on the offensive end a little more. He was taken out of the game in the 72nd minute of the game for defender Kang Min-soo. Korea pressed hard in the second half and while its midfielders and forwards were active in Serbia’s zone, its forwards lacked the finishing touch.

“I have evaluated most of the players playing their professional football abroad. We will concentrate on the domestic players in January and February with the goal of filling 80 to 90 percent of the roster,” Huh said. “Since a lot of our players did not have a lot of experience against European teams, they seemed a bit uptight to start the game.

“As time passed, our players began to relax and played better. We will need to work on creating goals when opportunities present themselves and connect on accurate passing against bigger and better skilled teams at the World Cup.”

The national team will then compete in the East Asian tournament in Japan before playing in one international friendly match - possibly against England - and will hold a final training camp in Austria starting on May 11.