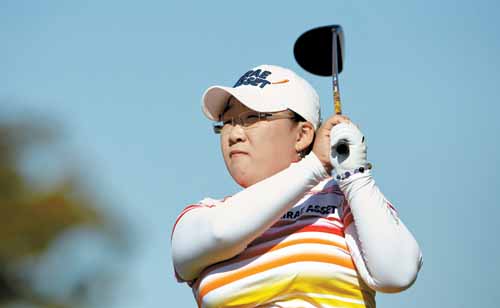 HOUSTON - Shin Ji-yai and Lorena Ochoa will take their duel for LPGA Player of the Year honors down to the wire this week at the LPGA Tour Championship.

South Korea’s Shin is trying to become the first player since LPGA legend Nancy Lopez in 1978 to win both Rookie of the Year and Player of the Year. If she can pull it off, she’ll end world No. 1 Ochoa’s three-year reign. Shin, 21, won three times last year before joining the LPGA Tour, including the Women’s British Open. She followed with three more wins and 11 top-10 finishes this year to secure Rookie of the Year honors.

“I started the year off with my goal to win rookie of the year and now I have a chance for player of the year,” Shin said. “That makes me happy.”

Ochoa has also won three times this year. But Ochoa, whose wedding to the CEO of her biggest sponsor, AeroMexico, is coming up after the season, hasn’t shown the same dominant form that she displayed the previous two seasons, and trails Shin slightly in the Player of the Year race. Ochoa can secure her fourth Player of the Year award with a win, with anything less she’ll need help from other players.

“It has been a really good year for me in ways, sometimes difficult on the golf course, but I’m very happy,” Ochoa said. “I have a lot of things to focus on off the golf course. I’m just going to try to enjoy the week and then get ready for the wedding.”

Shin and Ochoa don’t have only each other to worry about, however. The field for the final event of the season also includes third-ranked Cristie Kerr and young stars Michelle Wie and Paula Creamer. Wie is coming off her first professional victory, at last week’s Lorena Ochoa Invitational in Mexico. Wie, the onetime prodigy whose first LPGA Tour win had been long anticipated, is hoping to build on that success.

“I went through some ups and downs, but it was a great learning experience for me this year,” Wie said. “For sure it’s [pressure] definitely off my back and I think hopefully life will be better, but I still have a lot of work to do.”

LPGA commissioner Michael Wahn, who took over in October after former commissioner Carolyn Bivens was ousted in a player revolt, has said Wie has the kind of star power the women’s tour - battered by world economic woes - needs. Arriving at a Pro-Am party on a Tuesday night of a tournament week, Wahn noticed auction bidders were buzzing

“When I walked in, I noticed the bidding was up to $22,000,” Wahn said. “I asked somebody what they were bidding on and they said, ‘They’re bidding to play golf with Michelle Wie.’