From digital screens to sculpture gardens, art the masses can enjoy

From digital screens to sculpture gardens, art the masses can enjoy 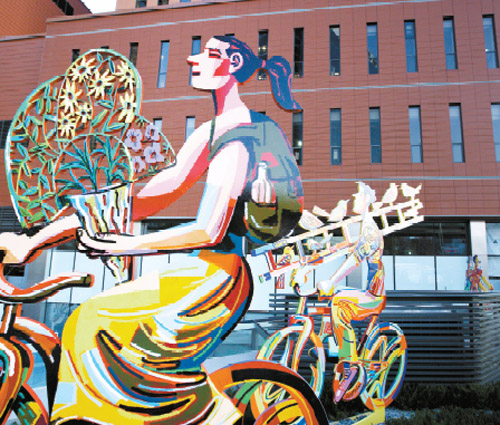 “Riders,” by David Gerstein, on the left side of the Seoul Square building Provided by the Gana Art Center

Perhaps you’ve seen the seven giants towering over downtown Seoul, lighting up the evening sky in brilliant hues of blue, green and red. These “people,” if you want to call them that, are colorful, friendly and, luckily, just two-dimensional.

The figures are part of an evening art display on the digital facade of the newly opened Seoul Square building - formerly known as the Daewoo Center - in front of Seoul Station.

The facade, dubbed a “media canvas,” is the centerpiece of a larger effort to transform the front of the city’s central train station into a vibrant, innovative area that could become a tourist attraction in its own right. It’s also the city’s latest effort to create public artwork that can be enjoyed by large numbers of people.

The newly opened digital display is turning heads for its sheer size. Towering 78 meters (256 feet) high, stretching 99 meters wide and covering a total of 7,722 square meters (83,118 square feet), it is the largest light-emitting diode (LED) screen in the world. The screen consists of 42,000 LEDs fixed onto Spanish terra-cotta tiles blanketing 19 floors of the Seoul Square building.

The facade officially came to life Wednesday evening, displaying the “Walking People” piece by renowned British pop artist Julian Opie. The screen will alternate Walking People with a piece by Yang Mankee, called “Mimesis_scape,” every other evening through the end of the year, when more works will be incorporated. 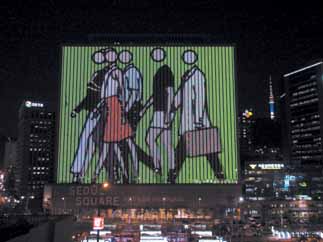 “Walking People,” by Julian Opie, on the facade of the building [YONHAP]

Opie’s piece displays seven people walking in random formation. Like his other pieces, these individuals depict the artist’s friends.

Yang’s Mimesis_scape portrays Mount Namsan under a sky that changes colors. Set against this backdrop is a multitude of Rene Magritte-inspired men dressed in black coats and bowler hats and holding open umbrellas, floating up and down while spinning around.

Yang said he wanted to recreate the mountain skyline to help break up the monotonous cityscape. “The Seoul Square building is very overwhelming and I wanted to revive the scenery of Namsan,” Yang said.

The former Daewoo building was considered an architectural and technological monument when it was built in 1977, but many locals also criticized it for blocking the view of Namsan. The effort to revitalize the building with artwork both inside and out started one year ago when KR1, which owns the structure, opened bids for the project. The Gana Art Center, which strongly pushed a media art concept, won the bid. It cost 6 billion won ($5.2 million) to produce the LED screen and adorn the inside of the building with various artworks.

“With Korea being an information technology leader, media art seems to be the best fit,” said Lee Kyung, executive director of the gallery.

Yang, the artist, also said there are many benefits tied to having media art in public areas. “Various types of works can be shown, and the possibilities are unlimited,” Yang said. “Best of all, many people can see it.”

Kim Jang-un, a local art critic, said it also falls in line with the broader direction of the country’s cultural scene. “Korea is moving forward culturally, and as part of that we’re seeing various projects conducted in the name of public art,” Kim said.

So far, the new display is drawing plenty of interest from Seoul citizens and visitors. Pedestrians in front of Seoul Station used words like “amazing” and offered up comments such as “it makes the area livelier,” “it’s very innovative and imaginative” and “it’s eye-catching and easy to understand” when asked what they think about the display.

The inside of the building has been transformed a bit as well, displaying works by London-based architect, designer and artist Ron Arad; Israeli artist David Gerstein; Korean photographer Bae Bien-u; Korean sculptors Seo Jinnie and Bahk Seon-ghi. Arad’s “Conceptual Furniture” consists of two large half-globular pieces: a metal desk and a wall installation. Placed in the lobby, they are the first thing people see when entering the building, and in fact two clerks actually sit behind the desk.

Gerstein, who is famous for creating colorful hand-painted sculptures, has two pieces - “Tree with Butterflies” and “Riders” - in the sunken garden on the left side of the building and another piece, titled “Cosmopolitan,” in the basement.

“The sunken garden is located in a part of the building where there is no direct sunlight,” Lee said. “We wanted to make the space livelier.”

The photograph near the main elevator in the lobby is Bae’s signature piece, depicting a pine forest. The works by Seo, Bahk and Kim are located on the third floor.

The Gana Art Center intends to add more works from other artists on the LED screen and is currently in discussions with the Seoul city government about what to display next. 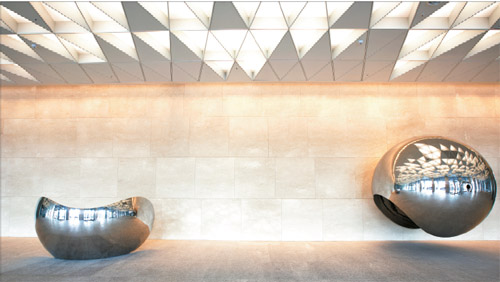 “Conceptual Furniture,” by Ron Arad, on the first floor of the Seoul Square building. Provided by the Gana Art Center

Left: “LED Gallery” on the rear wall of the Kumho Asiana building Right: “Hammering Man,” by Jonathan Borofsky, in front of the Heungkuk Life Insurance building

Walking People will be on display tonight. It alternates every other evening with Mimesis_scape. The pieces are displayed in 10-minute increments starting every hour from 6 to 11 p.m. For the best view, head to exit 2 at Seoul Station.


Public artworks are popping up seemingly every day, offering a breath of fresh air for Seoul citizens surrounded by suffocating concrete buildings. There are now many places in the city where you can appreciate public art. Following are the sites we recommend.

“Hammering Man,” by Jonathan Borofsky, is perhaps one of the most well-known public artworks in Seoul. The sculpture, which moves its right arm in a hammering motion every minute, has even become a landmark in the neighborhood.

If that’s not enough to grab your attention, there are 10 interesting sculptures and murals inside the Heungkuk building as well. A large sculpture titled “Your Long Journey,” created by Fre llgen, is 40 meters in diameter and 4.5 meters in height, ranking it as the biggest indoor installation in the country. There is also a huge mural by Kang Ik-joong and a sculpture by Romero Britto.

When the sun goes down, the rear wall of the building comes alive with a digital display. The wall contains 69,000 light-emitting diodes (LEDs) and measures 92 meters high and 23 meters wide. It ranked as the biggest LED wall in the country before Seoul Square’s media canvas was completed. Twenty-six types of graphic images appear for five hours every night.

“The building is a medium for infinite imagination and the future, and it will become a cultural space for Seoul citizens,” said Lee Jeong-gyo, a Hongik University design professor who produced the content for the wall.

The best place to see it is from either City Hall or Deoksu Palace.

The Trinity Garden on the sixth floor of the store in central Seoul is an outdoor sculpture garden. Although there are only five pieces there, all of them are the works of 20th-century contemporary masters - Henri Moore, Joan Miro, Claes Oldenburg, Alexander Calder and Louise Bourgeois.

Posco Center: TVs on the ceiling

The avant-garde steel sculpture in front of the building is called “Flowering Structure,” by Frank Stella. The sculpture, made of 30 tons of stainless steel pieces, was once criticized for its bizarre shape. But it matches the steel company’s ultramodern headquarters nicely. Inside the lobby are the works of Korean video artist Paik Nam-june: “TV Funnel” and “TV Tree.” Over 160 television sets hang from an upside-down, funnel-shaped structure and a tall pillar. The colorful images on the monitors are dazzling.

The MCM parking tower became a landmark in the trendy streets of Cheongdam-dong, southern Seoul, when it was built last year. The facade of the 14.5-meter tower is covered with wooden panels painted in yellow, red, orange, purple and white. The colorful front is quite noticeable in this neighborhood. Richard Woods, a renowned British contemporary artist, decorated MCM’s flagship store. Woods is known for creating art pieces with plywood with woodcut prints. Woods made a similar wall decoration piece in New York for Paul Smith’s Soho store. All the plywood pieces were transported via air from Britain.