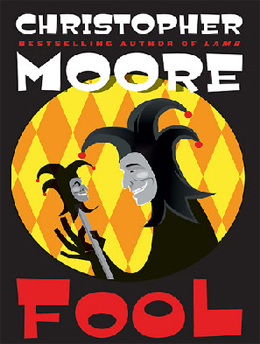 It’s no small task retelling the story of one of the greatest writers of all time. But that’s exactly what comedic novelist Christopher Moore set out to do in his latest book.

In “Fool,” Moore turns Shakespeare’s play “King Lear” on its head. Instead of being a tragedy, Moore’s book is a comedy. A relatively minor character in the play, the court jester, narrates Moore’s tale. And the text is littered with contemporary British and American slang and references.

In fact, readers familiar with Shakespeare’s Lear might have a hard time recognizing Moore’s creation as a modern incarnation of the play. Moore admits that he pulled lines for Fool from no fewer than a dozen plays. The three witches from Macbeth even play a large role in his story. And this is how he keeps pages turning - despite the familiarity of the characters, readers don’t know where the story is going next.

Like Shakespeare’s play, Fool opens with King Lear making the decision to retire and give his kingdom to his three daughters. He gathers the girls before him and tells them he will give the largest portion of his riches to the one that loves him the most. His first two daughters boast that they love him more than anything else in life. The youngest and the king’s favorite, Cordelia, admits that when she gets married she will love her husband more than her father. Enraged, King Lear disowns Cordelia and divides his kingdom between his two elder daughters.

Here is where the intrigue begins. Lear’s power-hungry daughters do everything they can to wrest the full share of the kingdom from their father and each other. People are stabbed, eyes are plucked out and more than one character goes mad in the process.

The fool, in true Shakespearean form, is the speaker of truth - the only one who is allowed to tell it as it is simply by virtue of not being taken seriously. Under the guidance of the witches and a ghost (to quote Moore: “There’s always a bloody ghost!”), the fool called Pocket manipulates the royalty and exacts revenge on those who hurt the people he loves.

Pocket is a perfect narrator. He is entertaining, sharp and most importantly human. Moore takes us behind the belled coxcomb and reveals a lonely man, cast away first by his mother then by the nuns that raised him. The family he has created for himself is motley - his “natural” apprentice who has a knack for impersonations, a laundress who shares more than just gossip and a knight who remains loyal to the king even when banished.

Moore walks a fine line between satire and slapstick. But it would be wrong to brush Moore’s book off as a bawdy and cheap attempt at poking fun at Shakespeare’s Lear. Fool definitely has its fair share of sex jokes, but like the fool himself, this is merely a facade. The novel delves deep into the minds and motivations of its characters, painting a society where power blinds and the weak seek vengeance.

Fool should not be discounted as unoriginal - it is anything but. As Moore points out in the author’s note, Shakespeare took the story line of King Lear from the folklore of his time. Now that Shakespeare’s plays are our cultural heritage, Moore has churned the tale once again, bringing with him a vibrancy and imagination all his own. Fool is a strong novel in its own right and should be appreciated as such.

Moore’s novel is one of the funniest books I’ve read this year. It is sure to snap even the most tightly wound Shakespeare purist out of the winter doldrums.