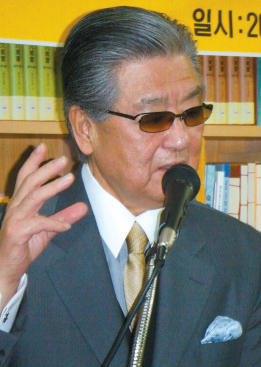 Tongsun Park, a main figure in the Koreagate scandal in the 1970s, speaks at the Academy of Korean History and Culture on Tuesday, in Seocho-dong, southern Seoul. [JoongAng Ilbo]

Tongsun Park, the central figure in the Koreagate scandal that broke out in 1976, opened his mouth for the first time in quite a while.

Park gave a speech this Tuesday in Seocho-dong, southern Seoul, titled “The importance of nongovernmental diplomacy for today and tomorrow.” Although he has not appeared in public often in recent years, he said he decided to give the speech out of respect to Lee Hu-rak, the former head of the Korean Central Intelligence Agency who died last month at the age of 85. Park said that he felt sorry that Lee had died without leaving any documents about their generation and what they went through.

Koreagate was a political scandal during the late 1970s involving Korean political figures seeking to influence U.S. congressmen. The scandal surfaced after then U.S. President Richard Nixon decided to withdraw troops from Korea and Korea-U.S. relations took a rocky turn. During this time, Park, a wealthy businessman, was charged with bribing members of the U.S. Congress with money from the Korean government. The scandal was the top story of The Washington Post’s Sunday paper on Oct. 24, 1976.

“I am far from being a lobbyist,” said Park at the start of his speech. “I consider myself to have been involved in nongovernmental diplomacy with the U.S. during a time when Korea was struggling to survive, during the 1960s and 1970s. At the time, the concept of nongovernmental diplomacy did not exist, and even high-level Korean executives were only able to meet with branch managers when they went to the U.S.”

Park received heavy criticism in the Korean press for his involvement in Koreagate. In his speech, he expressed regret about this, but appeared appreciative of the relatively more favorable treatment he received in the Japanese press.

“Japanese reporters wrote that I was one of the first Asians to stand in front of Westerners and speak his mind,” he said.

Park was also involved in the scandal over the Oil-for-Food Program (a United Nations program to allow Iraq to sell oil in exchange for food and medicine) during the 1990s and was convicted in 2006 on conspiracy charges. “If I thought of how I was falsely accused [for the Oil-for-Food scandal] I would have committed suicide 10 or 20 times by now,” he said. “It was a heartbreaking incident, in which I went to Iraq to help the refugees and got charged with illegal lobbying.”

Park also talked about his personal life and how he grew up, training to become a violinist and then going to Georgetown University at 16 and later becoming a socialite in Washington in his late 20s. He even gained a reputation for being Asia’s “Great Gatsby.” Park currently resides in Korea and is chairman of the consulting firm Parkington Corporation.