From mining village to museum town

From mining village to museum town 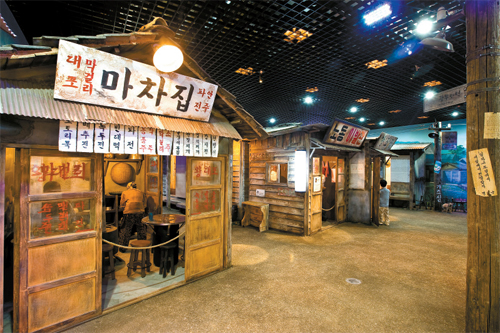 The Gangwon Mine Cultural Village in Yeongwol

Yeongwol was a crowded mining village bustling with people in the 1930s. Ffity years later, the mines began shutting down and people started leaving for more opportune locations. Today, the shells of empty buildings, schools and mines remain as stark reminders of the vibrant days gone by.

In recent years, however, people have begun to make use of these buildings, transforming them into museums and bringing the community back to life.

The first museum to open was Yeongwol Book Museum, which opened in 1999 in what used to be a school. Although the locals criticized the developers for opening a museum deep in the mountains, Chosun Minwha Museum opened the following year. Museum after museum began to fill the empty buildings.

Area residents are still at a loss to explain why so many museums opened here. However, it is thanks to the museums that Yeongwol County was designated a special museum district last year, which has led other local governments in the area to try to repeat the phenomenon to open more museums.

On a recent trip, I went to Yeongwol to see the museums, all 18 of them, for myself.

Yeongwol County is wide and the museums are scattered in every direction. I drove around for the whole day but was able to see only eight museums, less than half of the total.

Eleven museums are privately owned. The director of one of these, the African Art Museum in Kimsatgat-myeon, formerly known as Hadong-myeon, is Cho Myong-haing, the former ambassador to Nigeria.

Cho has collected many of the artworks himself, making several trips to the African continent to enhance the museum’s collection.

Lee Dae-am, the director of Yeongwol Insectarium, another private institution, was the first Korean to receive an award from an astronomy association in Japan for discovering a comet. Later, he moved to Yeongwol because he loved stars. Instead, he fell in love with insects. The museum exhibits over 500 insects from his collection and even has live insects on display.