New look for an old neighborhood

New look for an old neighborhood 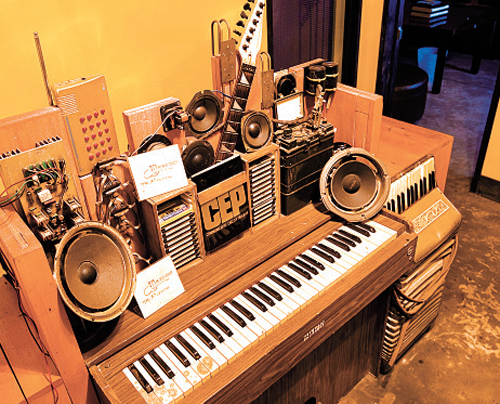 With the exception of the Pusan International Film Festival and the Busan Biennale, my hometown of Busan is not exactly known for its culture. On a recent trip, however, I happened upon a small neighborhood that could just be the beginning of a cultural revival for the city.

The area is known by the locals as Culture Street and it is located in the Daeyeon neighborhood. It is not big but it is large enough to house a small enclave consisting of a gallery, a theater, a cafe, a restaurant and a noraebang.

What first caught my eye were the area’s external features. Culture Street is lined with trees and the area has an old-fashioned air about it.

As I entered the area, which covers 1,000 square meters (10,763 square feet), I discovered over 10 shops nestled tightly together. The first place I visited was Seokryuwon Gallery. Upon entering, I was greeted by a pomegranate tree that I was told is over 300 years old. Inside, the floor is covered with soil and the ceiling with branches. Nearby, the cafe and wine bar Daban is decorated with secondhand travel bags and hats placed here and there. The tabletops are made of old Chinese doors. Next, the beer place Nogada has over 23,000 vinyl records and CDs. Then, when you head into the noraebang Punggeum, which means organ in Korean, the organ is the first thing you see. If you get hungry, try the Italian restaurant Delicioso, where the Korean TV drama, “Friends,” was shot.

The area was created by Gasan Architectural Firm. Its CEO and architect Choi Yoon-shik, 51, who played in a band when he was in college, tried for years to bring investors to the area. When that didn’t work, he took out a loan and started developing it on his own, enlisting the help of professional landscaper Park Bong-ryeon.

Last year, the team was awarded an architectural prize for Culture Street from the city of Busan.

Cho said he is happy to have participated in the creation of the area and hopes to see it become a tourist attraction but he is rather modest about his contribution to its development, saying, “I don’t think of this location as my personal property.”