Laugh it up: Exploring the healing effects of humor

Laugh it up: Exploring the healing effects of humor 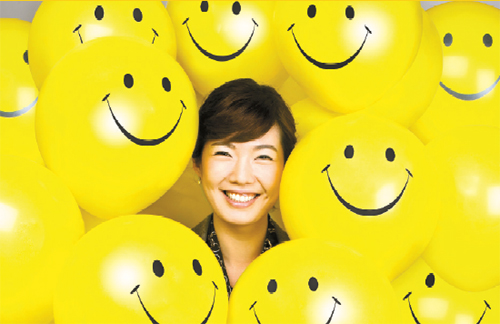 One might have expected the first meeting to be a bit somber and serious, as these types of gatherings are usually light on laughter. But it was exactly the opposite. In fact, this was more like a party.

At one point, those in attendance cheered and clapped to the song “Mamma Mia” from the Swedish pop group ABBA. Later, Bae Ki-hyo, a professor at Daegu Health College, sauntered up to the podium to give a speech while wearing goofy glasses.

This obviously isn’t your typical everyday medical group.The organization, called the Korea Laughter Clinic Academy, was founded to prove and promote the efficacy of so-called “laughter therapy,” which centers on using humor as a healing method.

It’s one of the newest such groups on the scene as more health professionals in Korea explore the benefits of laughter for health and recovery, building on foundations established in this area over the past few decades.

Norman Cousins, a writer and promoter of holistic healing, was one of the first people in recent times to examine how laughter affects the body. He published a book in 1979 entitled “Anatomy of an Illness” about combating life-threatening illnesses through humor. In 1989, Itzhak Fried, a professor of neurosurgery at the University of California in Los Angeles, wrote an article for the science journal Nature that claimed there is a spot in our brains that is strongly related to laughter.

Since then, there have been a series of studies worldwide conducted on the relation between stress and humor and between laughter and the immune system.

In Korea, however, the study of laughter therapy is only in the beginning stages, as there have been just a dozen or so research papers on the subject published in the last few years. 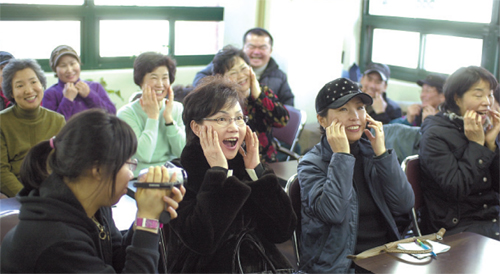 Still, more people seem to be buying into the overall concept, as dozens of new programs and organizations have cropped up in recent years that promote concepts such as “laughter treatment” and “happiness training.”

Han Kwang-il was one of the first locals to get involved, starting the Korea Laughter Center in 2004. Since that time, the number of institutions in the country that train and issue licenses in this field has grown to more than 300. The licenses are not official from a medical perspective, and of course there is plenty of skepticism about the overall concept.

But there are plenty of advocates in the medical world that help give it some clout. Recently, state-run health clinics as well as university and general hospitals around the country have started incorporating laughter therapy. In 2006, Myongji University, for instance, started a humor therapy course for graduate students getting their master’s degrees in education and social studies.


Regaining the ability to laugh

Laughter, it seems, has not only been a missing part of health care, but also of our daily lives.

Respondents to a survey of 500 people by the SK Group said they laugh 10 times a day on average, for 8.6 seconds each time, or around 90 seconds of laughter each day.

That’s a relatively paltry number, at least compared to babies. Research shows that humans smile and laugh much more as infants and early adolescents.

As people grow older, they typically laugh less, and some don’t giggle at all anymore. Supporters of laughter’s healing power say you can change that, though.

“But think about it: When you were young, you laughed over trivial things. Then you grew up and forgot to laugh. Now you’ve become dull and don’t laugh easily. But if you practice laughing, you’ll be able to laugh over even small things. And it helps: The hormones secreted when people laugh are known to alleviate pain 200 to 300 times better than morphine.”

Some patients swear by the concept.

Jeon Geun-suk was diagnosed with lung cancer, which was in its final stage, in April 2008. The cancer had spread to her liver, and surgery was not feasible. 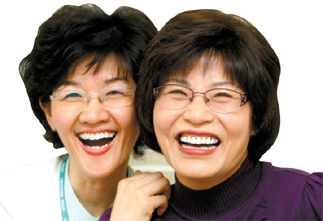 It was difficult for Jeong to accept her condition, in part because she did not smoke or drink. Her doctor said she was going to live for only one year. But she is still alive today. Aside from chemotherapy, Jeon thinks there’s something else at work in her recovery. While she was struggling in her fight against cancer, Jeon learned about laughter therapy via the Internet in August 2008, when she discovered a free class offered by the Gangnam District office.

In the beginning, she felt uneasy about inducing laughter on purpose. Then, after she tried it a few times, it became easier. She eventually joined the one-hour laughter therapy session at Seoul National University, which is now a very popular gathering.

“After laughing for an hour, my whole week is pleasant,” Jeong said. “In February, I heard that the cancer spread to my bones, but strangely enough it didn’t hurt. I believe it’s because of laughter therapy. The therapy is very effective.”

Park Hwa-il, 70, who had surgery for liver cancer, also attends the sessions.

“After getting surgery in 2005, I was discharged from the hospital three days earlier than scheduled with the help of laughter therapy,” Park said. “I feel like I’ll be able to go through treatment with ease from now on because of the therapy.”

Most people only learn about laughter therapy once they’re a patient, and sometimes by chance. And that’s exactly how laughter therapist Lee discovered it.

“After I experienced a car accident, I always felt stressed. I even had depression,” Lee said. “Then, five years ago, I randomly took part in a three-day laughter therapy session. After I consciously tried to laugh, my facial expression and personality started to change.” After that experience, she began studying laughter therapy because she wanted to share the benefit with other patients. Lee got a laughter therapy license and developed her own therapy techniques, which involve trying to induce giggles while doing mundane things at home.

However, Lee warned that laughter is not a cure-all or an alternative to medical treatment. “If you already have conditions like cancer, depression or dementia,” Lee said, “you should get regular treatments and use laughter therapy as a complementary method.”