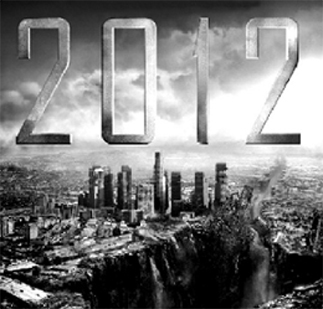 A baktun is the ancient calendar with a cycle of 394 solar years that the Mayans used for recording their history. The calendar started in August 3114 B.C. and stops on Dec. 21, 2012. There are no more days after that.

A new movie titled “2012” starts from there. There is no written prophecy in the Mayan records that the aforementioned date is doomsday. There is no way to find out the reason why, however, the Mayan calendar stops there.

Recently, a lot of so-called scientific evidence has been added to support the prediction that 2012 will be the “Last Judgment.”

They include the theory that disastrous climatic change and crustal displacement will take place due to a polar shift, and that all kinds of life on earth will perish due to the bombardment of solar flares.

It is reported that fears of doomsday spread fast among our teenagers, who are more sensitive than others, after local television stations broadcast programs related to the doomsday scenario.

A countless number of eschatological theories have been created over the years and eventually disappeared. The most common were the ones claimed by religious sects or denominations.

It is interesting to note that the eschatological behavior of the followers of such religious sects is not affected by the fact that the predictions of their leaders were proved to be false and that the dates of doomsday were changed repeatedly.

Shoko Asahara - the founder of notorious Japanese religious group Aum Shinrikyo, which masterminded the 1995 sarin gas attack on the Tokyo subway - predicted doomsday five times, but all of those predictions were proved to be false.

In retrospect, people from various walks of life made such predictions. Pope Innocent III predicted that doomsday would come in the year 1284, the 666th year after the founding of the religion Islam. Christopher Columbus claimed that the Last Judgment would be in 1658. And John Napier, who invented logarithms, predicted the years 1688 or 1700 would be the Earth’s last.

Astrologers claimed that the planets of the solar system would form a “grand cross,” which is mentioned in a prophecy of Nostradamus, centering on the sun in July 1999, and it would result in a big change in the magnetic field of the Earth. But nothing actually happened, of course.

However plausible the movie may sound, it is obvious that the members of 2012’s production team are not the least concerned with the predictions about doomsday in 2012. After all, if they were convinced that what is described in the film would take place in reality, when do they think they can spend the money they earned from the movie?


The writer is the content director at JES Entertainment.