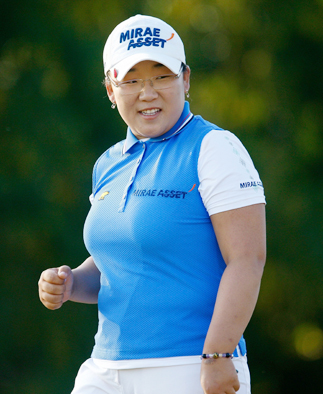 Shin Ji-yai smiles after a birdie putt on the 12th hole during the second round of the LPGA Tour Championship on Nov. 22. [AFP]

After two days of rest due to heavy rain, play resumed at the LPGA Tour Championship at the Houstonian Golf and Country Club in Richmond, Texas.

Two days of downpour seemed to have been a big boost to Shin Ji-yai. She returned with a five-under par 67 including six birdies and one bogie to close the gap to one shot behind leader Kristy McPherson. Shin has recorded seven-under par for the tourney and is currently in second place.

“The two days of rest due to the rain and the support of Korean residents in the area were both a huge help. Since we have a day of competition remaining, I will give it everything I have and put forth my best effort,” Shin told the media.

Lorena Ochoa of Mexico, who is also vying for the LPGA Player of the Year honor, refused to give a statement to the press after competition yesterday.

As the final tourney of the season, Shin can secure the Player of the Year honor by winning the LPGA Tour Championship. She is currently battling Ochoa for the title of top golfer. If Shin manages to maintain her place in the top six at the LPGA Tour Championship, she can become the first golfer since Nancy Lopez in 1978 to win the money list, rookie and Player of the Year honors, and the Vare Trophy for lowest scoring average.

Ochoa has been dominant on the LPGA Tour over the past few seasons and is currently vying for her fourth consecutive Player of the Year title. However, with a mediocre showing on round two, things got a little complex for the Mexican. She must now place in the top three and at the same time hope Shin finishes out of a top 10. The pressure is now on Ochoa to muster a comeback in the final 19 holes.

Shin and Ochoa are also in a close race for the Vare Trophy, which is awarded to the golfer with the lowest scoring average. Ochoa currently leads with 70.22 and Shin trails slightly with 70.27. Shin managed to narrow the gap in lowest average score with a strong showing yesterday.

Shin did not get off to a solid start in the opening round of competition in Richmond and fell behind Ochoa by four shots. Shin complained of fatigue and stated she was not in good physical shape at the end of the first round. However, as heavy rain drenched the Houstonian Country Club course over the weekend, the event officials put competition on hold and made the decision to reduce the final event of the season from four rounds to three rounds, or 54 holes.

The spotlight went to McPherson yesterday as she managed five birdies and shot eight-under par through 36 holes to take the lead. Since entering the LPGA Tour two seasons ago, McPherson has yet to win a tourney in her young career. Although Ochoa was leading Shin by four shots after the first day of competition, she had a mediocre day in which she managed three birdies and three bogies to fall to third place. She was trailing Shin by a shot, as of yesterday.