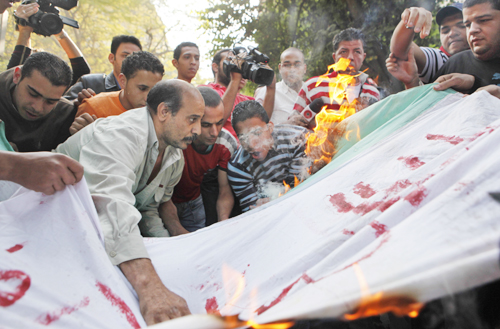 Prince Albert II of Monaco, left, poses with Jamaican sprinter, Usain Bolt, second from right, and U.S. track and field sprinter Sanya Richards as they hold their “Athlete of the Year Awards,” along with IAAF President Lamine Diak and the mascot of Berlin World Track and Field Championship 2009, on Nov. 22, in Monaco, awarded by the IAAF. [AP]

MONACO - Jamaican sprinter Usain Bolt, who is one of the world’s most recognized athletes, and American women’s 400-meter world champion Sanya Richards were named world athletes of the year on Sunday by the International Association of Athletics Federations.

Bolt, who won the award for the second year in a row, wiped out his 100- and 200-meter world records with stunning runs in the Berlin world championships in August.

“He has raised [his performances] to an unbelievable level,” IAAF President Lamine Diack told a news conference, calling Bolt a brilliant runner in both his specialities.

“He brings a lot of prestige to our sport,” Diack said. “He is one of the best known people on the planet.”

Richards, who previously won in 2006, described the honor as being on the same level with her Berlin victory, her first global title.

“I am going to be dancing all night,” the 24-year-old Richards said ahead of the IAAF’s annual gala. With no Olympic or world title at stake, Bolt said his biggest goal in 2010 would be to go undefeated on the new Diamond League circuit. The 23-year-old Jamaican is expected to face American world silver medalist Tyson Gay, the second-fastest 100-meter runner of all-time, at least three times with Jamaican compatriot Asafa Powell, the former world record holder, joining the pair in several races.

“With three great athletes in one race, anything is possible,” Bolt said. “I am going to be hard to beat if I am in shape,” added the Olympic and world champion, who did not lose a final in 2009.

“But if I get beat, I would not be surprised.” In the long term, Bolt said it would be important for him to defend his world and Olympic championships. Reuters