A landmark Korea can call its own

A landmark Korea can call its own 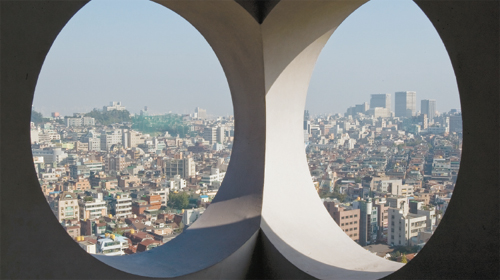 The view from within the Urban Hive building offers an incredible and unique view of the city. [JoongAng Ilbo] 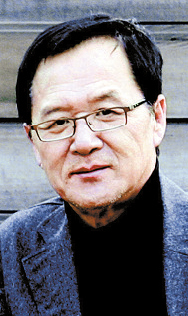 Out of the bevy of buildings that sprinkle the landscape in cities across the world, only a few enjoy global recognition.

Most people, after all, can rattle off the names of a least a few famous structures.

Which begs the question: What, exactly, makes a building or structure a landmark?

Take the Eiffel Tower in Paris, France, which is probably one of the most recognized sites in the world, a symbol of pride for the country and an ever-present monument that serves as an exclamation point in the skyline.

Yet in the first years after its completion in 1889, the tower wasn’t popular among educated Parisians, as iron was still an unfamiliar building material.

Today, it’s known not only for it appearance from afar but also for the expansive views of Paris offered up from inside it. For these reasons, the tower has been elevated to landmark status.

In Seoul, a new building in the bustling business district surrounding Sinnonhyeon Station has all the elements to become a representative structure for the area and the entire city itself. The 17-story office building, dubbed Urban Hive, was designed by one of the most sought-after architects in Korea, Kim In-cheurl. Its defining feature: 3,371 holes that dot its exterior, giving it the appearance of a beehive, hence its nickname.


Talk of the town

The building became the talk of the town in architecture circles even before it was completed a year ago, as its design is particularly unique in Seoul. And it has lived up to the buzz, recently taking home prestigious prizes awarded by the Korea Institute of Architects and the Seoul Metropolitan Government.

For all the accolades and attention, however, the Urban Hive is actually a very simple building. The exterior is essentially an exposed concrete wall that functions as the main structure of the entire building. The interior spaces are thus unhindered by vertical beams and supports.

That’s not to say it was a breeze to build. Simple buildings, in fact, can actually be more difficult to construct.

Kim has long used exposed concrete as his trademark material, but this marked the first time he used it to build what amounts to 17-story walls. The challenge was to make it feel like a singular structure. Like other concrete buildings, Urban Hive was built one story at a time - each level built by pouring concrete. It took painstaking efforts to ensure that each level had the same color and texture. Even something as simple as a traffic jam that delays the arrival of a concrete-mixer truck can alter those two elements.

Though the exterior is what got people talking, the view from inside is actually one of the building’s most fascinating features, providing breathtaking views of the city.

The holes, in fact, provide a visual screen that reorganizes the haphazard layout of Seoul, altering light and shadow and serving as windows that capture specific parts of the landscape.

Looking out through one hole, for instance, the Kyobo Building becomes a mere patch of red brick, while in another N Seoul Tower on Mount Namsan comes into focus.

In Kim In-cheurl’s own words, the important thing about the structure is “not so much how the building is seen, but how one sees through the building.”

A building does not become a landmark because of its great height or its spectacular form, observers say. If this were the case, Seoul would have hundreds of landmarks. Rather, a building becomes a landmark in a city when its citizens are able to identify with it.

There are a few structures in Seoul that fit this description. The Kyobo Building near the Urban Hive, designed by the famous Swiss architect Mario Botta, is considered one of them by some people. This building, however, was designed for its external appearance rather than for the views it provides from the inside.

The Urban Hive, however, is meant to serve both purposes.

But most people can’t see the unique views of Seoul offered by this structure, as the cafe on the ground floor is currently the only space that’s accessible to the public.

Its overall appearance from the outside and dominating presence offers an impressive addition to the skyline, one that’s sure to turn heads for decades to come. But for the Urban Hive to be a true landmark of Seoul, the terrace and the top floor of the building must be opened up for some kind of public use.

Ludwig Mies van der Rohe (1886-1969), one of the great masters of modern architecture, once said that “architecture is not invented every week.”

Kim In-cheurl is one of them. Born in 1947, shortly after Korea’s independence from Japan, Kim grew up in an era of scarce architectural training and therefore belongs to a generation of self-educated professionals in the field. 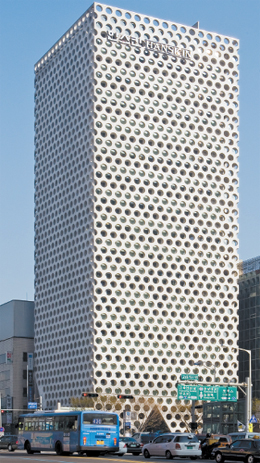 Located near the Gangnam business district, the building has emerged as a landmark for the area.

While most architects near his age have already retired, though, Kim has slowly but surely evolved and continues to break new ground. But it is not just longevity that sets him apart from others of his generation. Working carefully with concrete for more than 20 years, he has mastered the craft of the modern material. He has also long been a student of traditional Korean architecture. Through this study he has created a type of architecture that does away with the intentional design of form.

At the same time, Kim has continued to experiment and learn new things. For the outer concrete wall of Urban Hive, for example, he consulted Toyo Ito, a Japanese architect known for his creative use of structure. To learn from others, to create new things from this learning and to inspire others to learn: this is how an architectural culture is created.


*Pai Hyungmin is a professor in the department of architecture at the University of Seoul. He is an architectural historian and critic.