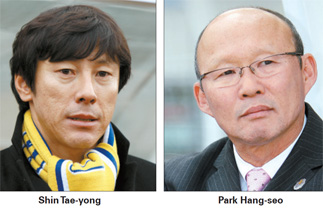 The battle for a spot in next year’s AFC Champions League and a shot at facing the Pohang Steelers in the semifinals takes place tonight.

With a lot at stake, the second round of the K-League Championship 2009 resumes tonight with Seongnam Ilhwa Chunma and the Chunnam Dragons facing off at Seongnam Sports Complex in Seongnam, Gyeonggi starting at 7 p.m.

Seongnam is the most decorated club in the history of K-League with seven league titles to its name. The team finished the regular season with the fourth best record in the league with a record of 13 wins, six ties and nine losses. The Chunnam Dragons, on the other hand, are the lowest ranked club in the postseason having finished the regular season sixth overall with a record of 11 wins, nine ties and eight losses.

Both teams had tough battles in the first round and both eked out wins in the penalty shoot-out after finishing extra time tied at a goal apiece. On paper, Seongnam Ilhwa have the upper hand. Seongnam boast an all-time record of 23 wins, 18 ties and 15 losses against Chunnam. More importantly, Seongnam Ilhwa have not lost a game to Chunnam when holding a home field advantage since Sept. 17, 2006 (three wins and two ties).

Chunnam manager Park Hang-seo led his men to a gritty win over third-ranked FC Seoul on Saturday and in the process earned a contract extension with the club. Park’s two-year deal was ending at the end of this season but with the first round upset, Park has been awarded with an extension by club officials. The details of the contract have not been released at this point. Chunnam will look to attack early and often in the game using Brazilian forwards Adriano Chuva and Wesley.

“We want to use our shortcomings from last season as a learning experience and want to compete for the title of top professional club in Asia next season,” Park said. “We will not make any big lineup changes for tonight’s game. Seongnam’s offense does not pale in comparison to FC Seoul and they have probably found a solution to the missing players in their defense. We do not have any big injuries. We will look for way to penetrate our opponent’s defense.”

In surviving the first round battle with Incheon United, Seongnam lost both their central defenders to questionable calls from the referee. With Sasa Ognenovski and Cho Byung-kuk out for the second round, manager Shin Tae-yong will resort to Jeon Gwang-jin, Park Woo-hyun and Kim Tae-yoon to plug holes on defense.

“The Chunnam players in the FC Seoul match had the determination and will to win. Since Chunnam has such a strong defense, it will be difficult for us if we let in the first goal,” Shin said.