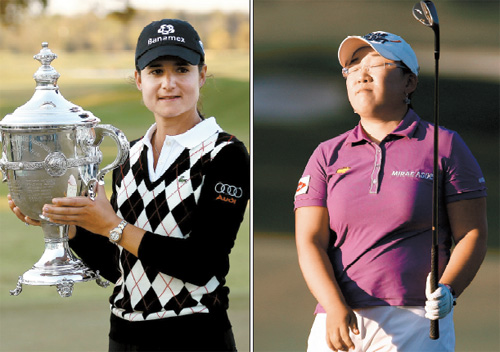 Left: Lorena Ochoa of Mexico holds her Player of the Year trophy on the 18th green after the final round of the LPGA Tour Championship on Monday in Richmond, Texas. Ochoa has now won four consecutive Player of the Year awards. Shin Ji-yai reacts to missing a birdie chip shot on the 18th hole. [YONHAP], [AFP]

Shin Ji-yai came close but fell one point short of achieving the LPGA Player of the Year award.

Anna Nordqvist of Sweden took the season-ending tourney and Lorena Ochoa of Mexico finished strong by placing second overall in the final round of play at the LPGA Tour Championship at the Houstonian Golf and Country Club in Richmond, Texas. In the process Ochoa staked her claim for a fourth consecutive Player of the Year title. Ochoa also won her fourth consecutive Vare Trophy, awarded to the golfer with the lowest scoring average.

“I did not have a good tournament overall. I tried my best but it just didn’t work out,” Shin said. “I managed to achieve my season goal [of winning the Rookie of the Year] so it’s okay.”

Shin had stated throughout the season that her goal this season was to win the top rookie honor and to win at least one tourney. She achieved her feat by winning the Rookie of the Year honor earlier this month and tied for the most wins on the tour with three.

Shin struggled in the opening round of play and complained of fatigue.

She returned after two days of rest with an impressive play of five-under par with 67 including six birdies and one bogie to finish second on the day. She looked to be in good shape to become the first female golfer since Nancy Lopez in 1978 to top the money list, and win rookie and Player of the Year titles. The 21-year-old finished eighth overall at the season finale event in Richmond.

Shin hit six-under par with 210 while Ochoa finished with a score of 11-under par with 205 to end the season with 160 points, edging Shin by a single point in the race for the Player of the Year title.

In contrast to the previous day, Shin looked shaky from the start and didn’t make a birdie until the 11th hole. Shin was narrowly holding onto a shot at winning the Player of the Year title until the 16th hole, tied for fifth and with Ochoa holding second place. Shin merely had to maintain her pace to secure the top golfer title but she faltered in the following hole. On the par-three 17th hole, she hit a bunker and bogeyed and bogeyed again on the following hole to drop to eighth overall and narrowly lose to Ochoa.

“My putting game was off and luck wasn’t with me today. I had several chances to birdie but I did not take advantage of the opportunities,” Shin said.

Choi Na-yeon of Korea and Kristy McPherson tied for third overall at 206. Sophie Gustafson, Kim Song-hee and Park Hee-young tied for fourth at 209.

Shin completed her rookie season on the tour tied for most wins in the season at three: the HSBC Women’s Champions, the Wegmans LPGA tournament and the P&G Beauty NW Arkansas Championship. Shin matched last season’s totals when she became the first non-member of the LPGA Tour to bag three LPGA tournaments by winning the Women’s Australian Open, the Women’s British Open and ADT Championship as a non-member of the LPGA Tour.